Biden’s Authoritarian Vaccine Mandates Possibly Jeopardize National Security, Public Safety Services, and Americans’ Jobs: President Biden’s executive order requiring employees of federal contractors to be vaccinated or face termination could impact federal services supporting our national security and border security.  Additionally, it may impact federal grantees, which could endanger the adequacy of police, fire, and other public safety and community services. President Biden’s policies forcing certain healthcare workers to be vaccinated and his efforts to micromanage American workers are equally concerning. Many of these workers were on the frontlines risking their lives throughout the pandemic. They should be celebrated, not punished.

Court Blocks Biden’s Vaccine Mandate on Employers: Recently, the Fifth Circuit Court of Appeals found the Biden Administration’s vaccine mandate on employers “grossly exceeds OSHA’s statutory authority” and blocked the rule from taking effect. Thanks to the success of Operation Warp Speed, Americans have the option to be vaccinated against COVID-19. But the medical decision to get vaccinated should not morph into a Washington mandate that forces the firing of millions of hard-working Americans.

Rules for Thee But Not for Me: Recently, Senate Majority Leader Chuck Schumer, ATF President Randi Weingarten, and several New York Democrat lawmakers jetted to Puerto Rico for a conference and partied without masks despite the island having an indoor mask requirement. Meanwhile, union boss Weingarten has called for children to wear masks at schools and even lobbied the CDC to keep schools shuttered while the science clearly showed kids could safely return to school. This latest incident follows a pattern of Democrats refusing to follow their own rules.

Why do Democrats continue to break their own rules when they mandate Americans follow them?

Scalise Blasts Biden’s Authoritarian Mandates: House Republican Whip and Select Subcommittee on the Coronavirus Crisis Ranking Member Steve Scalise (R-La.) blasted the Biden Administration’s policies requiring private sector businesses with 100 or more employees to require vaccinations or weekly COVID testing and mandating employees in certain health facilities be vaccinated by January 4, 2022. President Biden’s sweeping decrees on families and businesses are more examples of illegal government overreach that will force small businesses to fire millions of their workers. At a time when employers are already struggling to hire employees, President Biden should not make it harder on our economy by placing burdensome mandates on American workers, especially on healthcare workers who risked their lives to help their fellow citizens throughout the pandemic. Americans must be free to make their own medical decisions.

Democrats to Hold Hearing on “COVID Misinformation” After Perpetuating Misinformation: During the election, then Democrat presidential nominee Joe Biden and Vice Presidential nominee Kamala Harris recklessly and repeatedly called into question the safety of the COVID-19 vaccines in development under Operation Warp Speed. Senator Harris even refused to say whether she would take a vaccine if developed before Election Day. Additionally, while study after study showed it was safe for kids to go back to in-person learning, the teachers union lobbied to keep schools closed, and Democrat governors locked kids out of their classrooms. Will Democrats investigate their own misinformation campaigns at this week’s hearing?

An Illegal Vaccine Mandate (WSJ Opinion)
“President Biden was warned that he lacked the power to mandate vaccines for private workers, but he ordered the Occupational Safety and Health Administration to do it anyway. Late Friday came a sharp rebuke by the Fifth Circuit Court of Appeals that marks an important check on the runaway administrative state … This judicial smackdown is so overwhelming that it’s fair to conclude the Administration gave only passing thought to the law. It acted for political reasons, but even that has proven to be a mistake. The White House panicked amid the Afghanistan fiasco and Delta variant breakout, but it missed how resistant millions of people are to government orders regarding their health. The mandates have increased political polarization, and they are becoming less popular as people see that the vaccines, while effective, do not prevent infection as well as we might have hoped. They are still worth getting, but it ought to be a personal choice. Mr. Biden chose the progressive default of coercion. This is typical of his Presidency, and it’s one reason he has sunk in the polls. The Administration says it plans to continue defending the mandate but it will almost certainly lose if a challenge makes it to the Supreme Court. The Covid scourge has given government a political excuse to exceed its legal powers, and it’s vital that the courts rein it in for liberty’s sake.”

OSHA’s Vaccine Mandate Overkill (WSJ Opinion)
“Covid cases and hospitalization have blessedly plunged since the summer Delta surge as more Americans have been vaccinated or acquired natural immunity. Yet the Biden Administration is still fighting the last virus war, and on Thursday rolled out its worker vaccine mandate, which will likely do more harm than good … Vaccines have been a pandemic godsend. But the Administration’s unnecessary mandate is trampling state police powers, imposing new burdens on employers when they can least afford it, and making life harder for the unvaccinated who want to work in an economy with too few workers.”

Survey: Majority of Federal Employees Disagree With Biden’s Vaccine Mandate (Gov Exec)
“The majority of federal employees recently surveyed (53%) strongly or somewhat disagreed with the Biden administration’s COVID-19 vaccine mandate for federal employees, while 44% strongly or somewhat agreed with it. The Government Business Council, the research arm of Government Executive, sent a survey between October 27 and November 2 to Government Executive and Defense One readers, which drew 3,186 respondents. The survey had a 95% confidence level and margin of error of +/- 3%; the vast majority of respondents currently work for a federal agency but the results did include some retirees and congressional and private sector workers. President Biden announced the mandate on September 9 and the deadline is November 22. ‘I am not pro or anti-vaccine, I am pro-choice,’ wrote one federal employee in the comments section.”

Fauci Staffers Flagged Potential Gain-Of-Function Research At Wuhan Lab In 2016, Records Reveal (Daily Caller)
“Two subordinates of Dr. Anthony Fauci raised concerns in May 2016 that taxpayer dollars may be funding gain-of-function experiments on bat coronaviruses at a Wuhan lab, but dropped the issue after nonprofit group EcoHealth Alliance downplayed the concerns, documents show. The National Institute of Allergy and Infectious Diseases staffers reversed course after requesting EcoHealth Alliance President Peter Daszak submitted a ‘determination’ to the agency that downplayed the risks of his proposed experiments, the records show.”

Study: Benefits of in-person school outweigh COVID risks (Axios)
“A new study looked at COVID-19 spread among schools and found that kids can safely remain in class with the proper mitigation measures. The toll of learning loss due to the pandemic has been enormous. With vaccines now approved for almost everyone older than 4 — and clear evidence that spread can be controlled in schools — classes should be able to remain open. In a perspective published in Science on Thursday, researchers in the U.K. reviewed studies from around the world on the impact of COVID-19 on children and the extent of spread in classrooms. The researchers noted initial research found children ‘represented only a tiny fraction of total cases, hospitalizations, and deaths due to COVID-19 and invariably developed mild, transient, and self-limiting illnesses.’”

NY Democrats, Teachers’ Union Boss Partied Maskless in Puerto Rico (WFB)
“Senate Majority Leader Chuck Schumer last week joined teachers’ union boss Randi Weingarten and a squad of New York Democrats on a taxpayer-funded getaway to Puerto Rico. True to form, the Democrats violated the island’s strict indoor mask mandate by dancing and mingling like teenagers as if hundreds of Americans aren’t dying from COVID-19 on President Joe Biden’s watch. Like all New York public schools, Puerto Rico still requires the use of masks indoors, regardless of vaccination status. That didn’t stop the Democrats from ignoring science and putting lives at risk with their reckless behavior.” 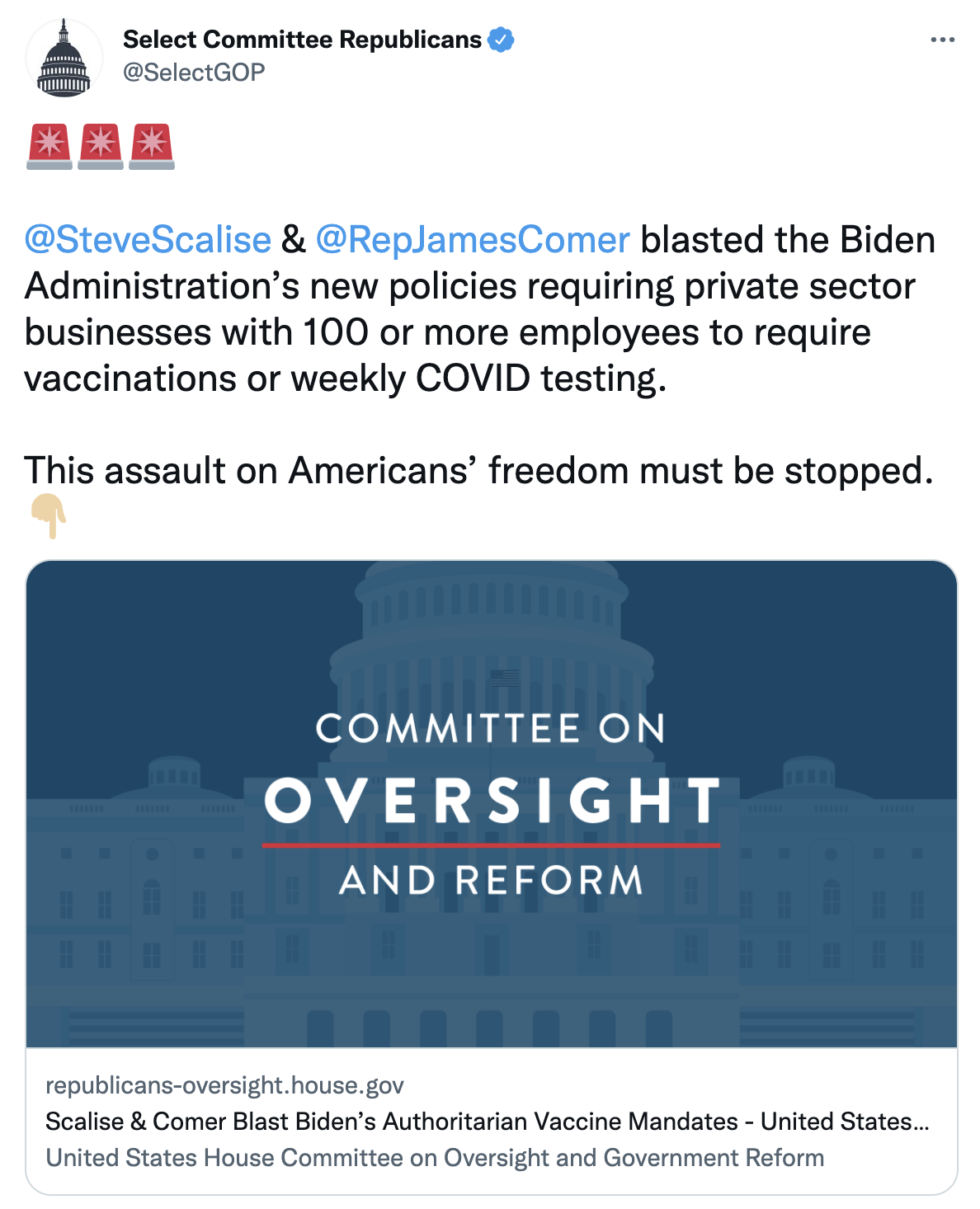 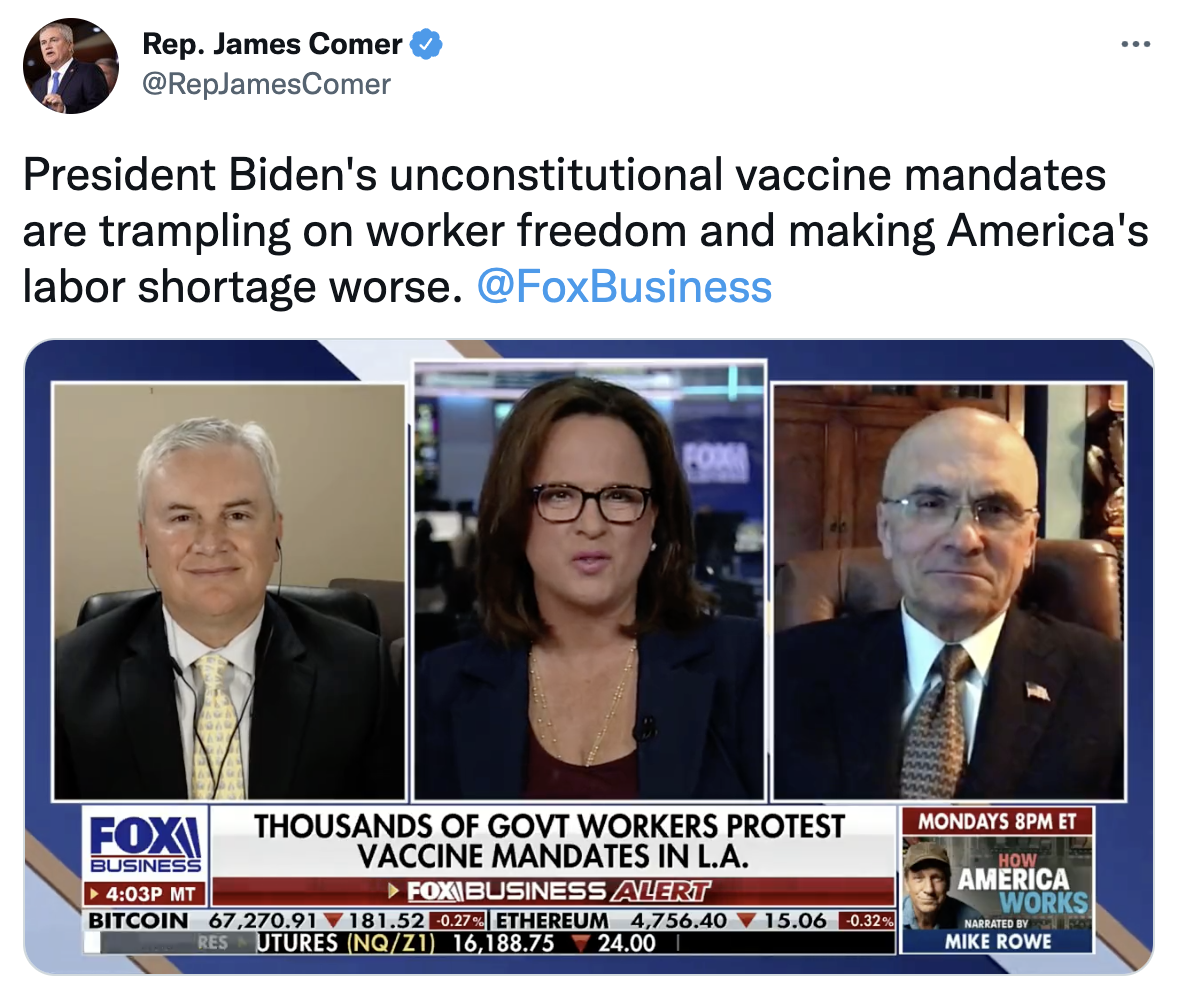 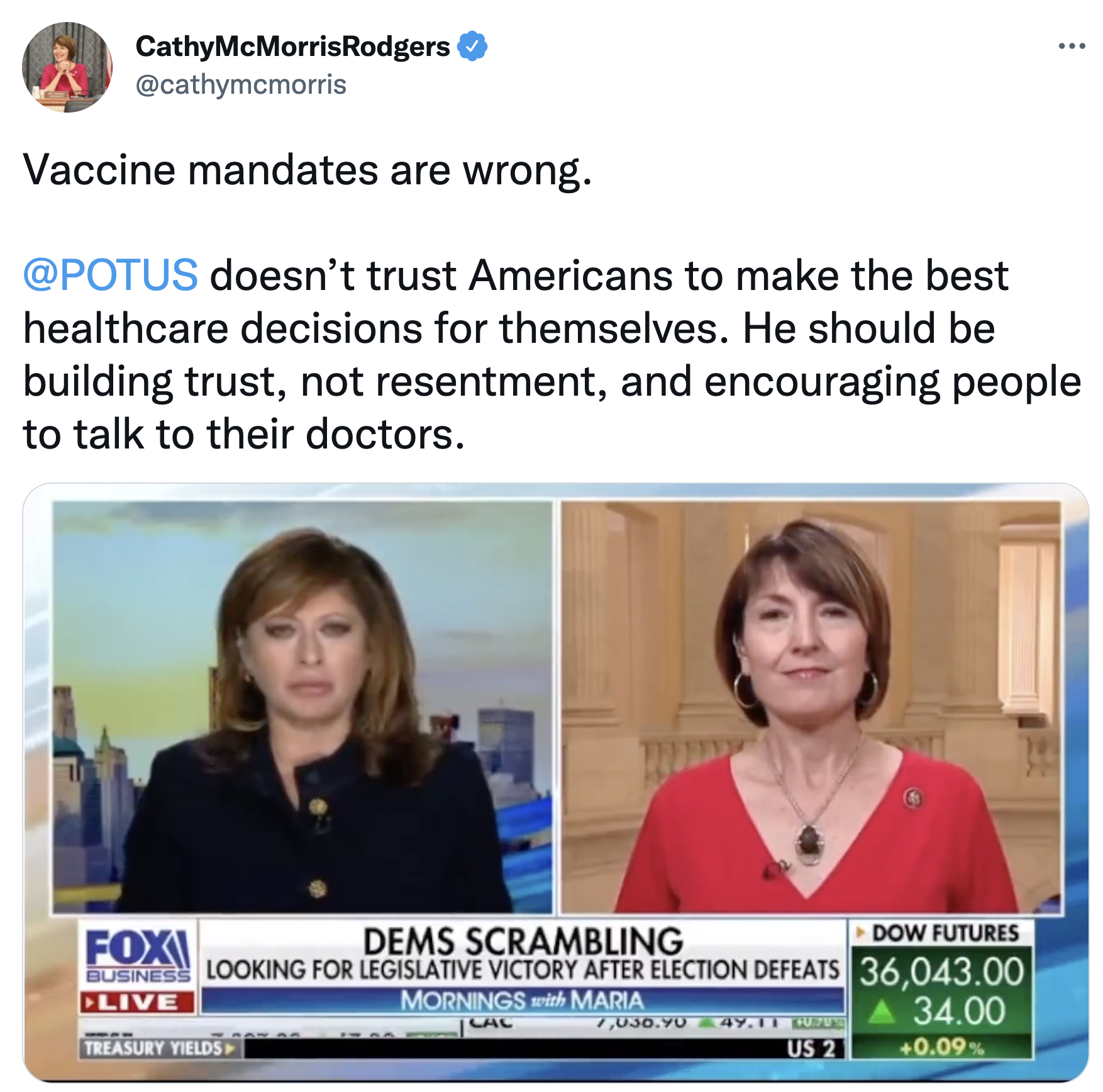 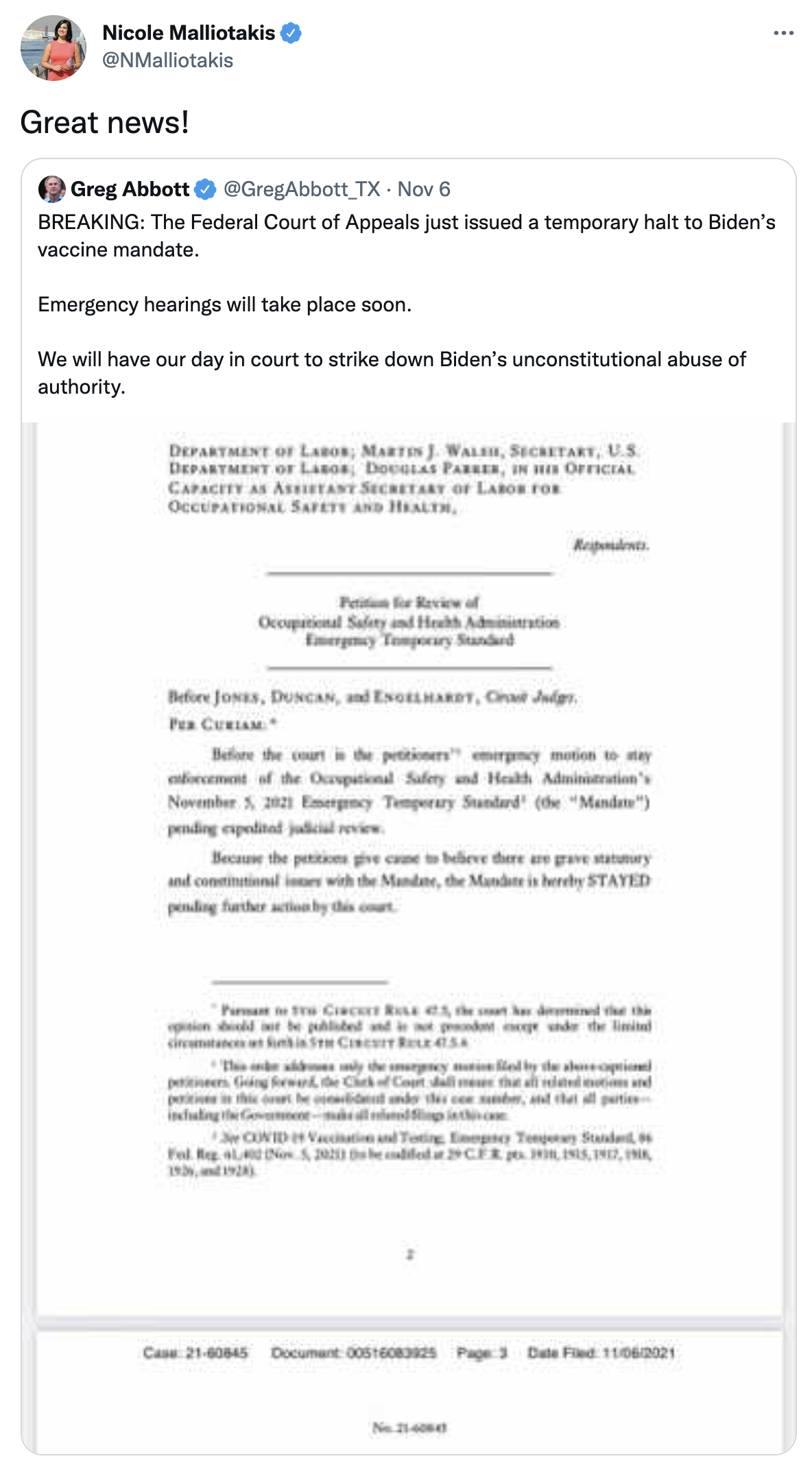 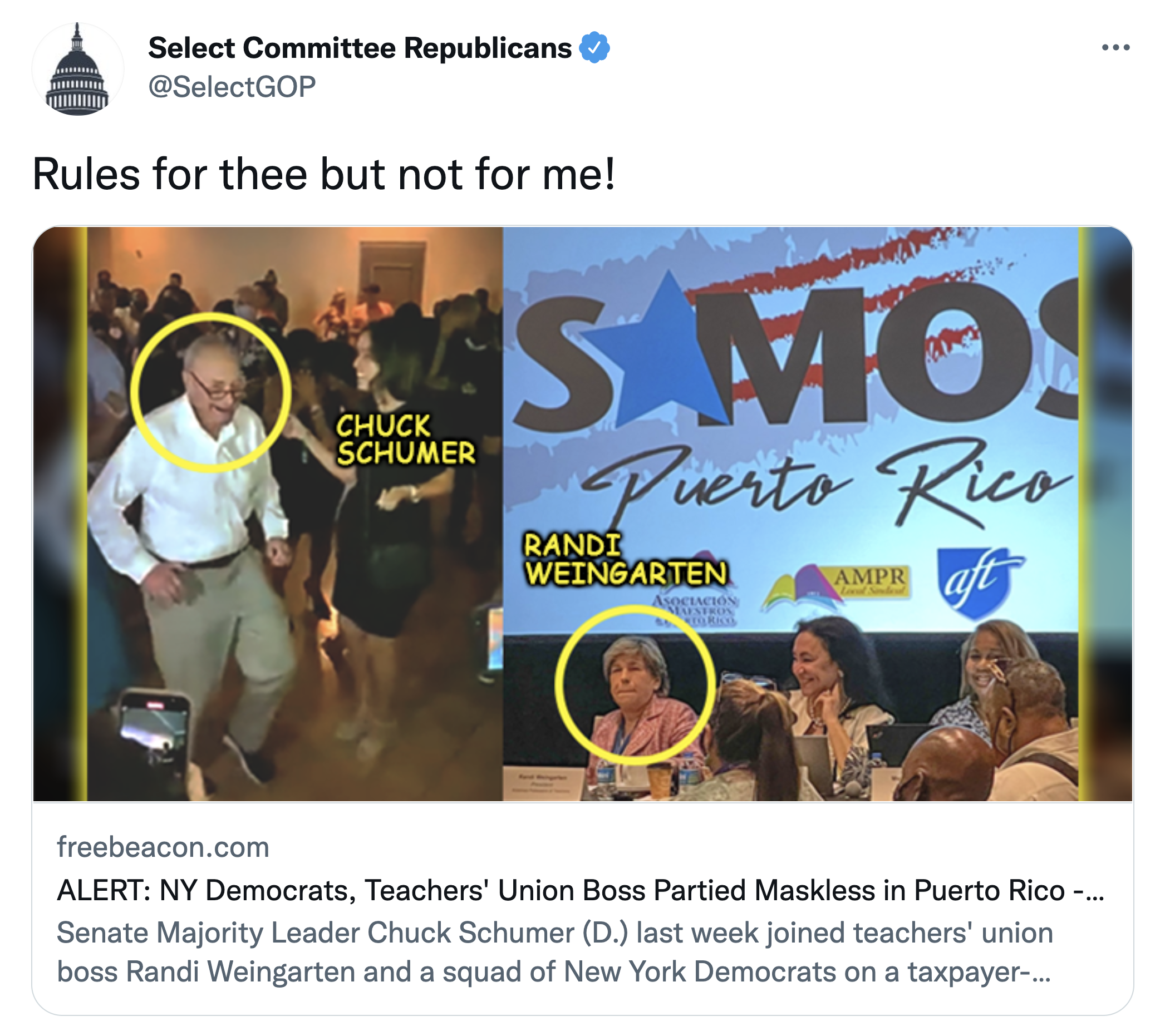