Democrats Refuse to Investigate COVID-19 Origins: Republican Whip and Select Subcommittee on the Coronavirus Crisis Ranking Member Steve Scalise (R-La.) has repeatedly called on Democrats to investigate the origins of COVID-19, but Democrat leaders have refused.

OMB Won’t Say if Biden Budget Funds Research at the Wuhan Lab: At last week’s House Budget Committee hearing, Office of Management and Budget (OMB) Acting Director Shalanda Young would not commit to saying President Biden’s budget request would not include funding for the research at the Wuhan lab.

World Leaders Care More About American IP than Biden: Ahead of the Group of Seven summit in Great Britain, President Biden’s support for waiving international patent protections for COVID-19 vaccines drew criticism from the European Union.

Bidenflation Hurting Those Hit Hardest by Democrat Lockdowns: The rapid rise in inflation since President Biden took office shows the clear consequences of massive deficit spending and the fallout from advancing an extreme left-wing agenda. The Labor Department recently announced that the consumer-price index increased by 5 percent since last May, the largest increase in nearly 13 years. The cost of food, gas, lumber, housing, used cars, and more are all up. This is a clear signal that the Biden Administration is overheating the economy.

The families hardest hit by Democrat COVID-19 lockdowns are now the ones hardest hit by the Biden Administration’s economic policies. Real average hourly earnings decreased by 3.7% since 2020. As costs go up and wages go down, the buying power for the average American decreases. The way out of this crisis is not to tax and spend trillions more, as President Biden proposes to do.

OMB Won’t Say if Biden Budget Funds Research at the Wuhan Lab: At last week’s House Budget Committee hearing, OMB Acting Director Shalanda Young would not commit to saying President Biden’s budget request would not include funding for the research at the Wuhan Institute of Virology (WIV). Mounting evidence shows COVID-19 originated from the lab and Republicans are investigating whether U.S. taxpayer dollars were at all affiliated with controversial research at the WIV.

World Leaders Care More About American IP than Biden: Ahead of the Group of Seven summit in Great Britain, President Biden’s support for waiving international patent protections for COVID-19 vaccines drew criticism from the European Union. Giving away the intellectual property of vaccine developers would not boost vaccine production for possibly years but would undermine U.S. innovation and weaken our ability to respond to future pandemics, and help Communist China. President Biden should abandon this plan to strip innovators of their constitutionally protected patents so that the United States continues to be the world leader in live-saving medical breakthroughs.

Feds Don’t Return to Work: President Biden is stalling the COVID-19 recovery by refusing to mandate federal employees return to the workplace. The federal government must set an example for the American people and return to pre-pandemic normal. This is yet another benefit available to federal workers but not American workers. Grocery store clerks, waiters and waitresses, gas station operators, and many more are all required to work in person, but federal employees aren’t. It’s past time for the federal government to lead by example.

Democrats Refuse to Investigate COVID-19 Origins: Republican Whip and Select Subcommittee on the Coronavirus Crisis Ranking Member Steve Scalise has repeatedly called on Democrats to investigate the origins of COVID-19, but Democrat leaders have refused. Recently, Scalise and over 200 members of the Republican Conference called on Speaker Pelosi to direct her committee chairs to join House Republicans in investigating the origins of COVID-19. Scalise and Oversight Committee Ranking Member James Comer (R-Ky.) also called on Chairs Jim Clyburn (D-S.C.) and Carolyn Maloney (D-N.Y.) to investigate the virus’ origins and hold Communist China accountable. Why do Democrats continue to shield Communist China from any accountability for unleashing COVID-19 on the world?

U.S. Report Found It Plausible Covid-19 Leaked From Wuhan Lab (WSJ)
“A report on the origins of Covid-19 by a U.S. government national laboratory concluded that the hypothesis claiming the virus leaked from a Chinese lab in Wuhan is plausible and deserves further investigation, according to people familiar with the classified document.  The study was prepared in May 2020 by the Lawrence Livermore National Laboratory in California and was drawn on by the State Department when it conducted an inquiry into the pandemic’s origins during the final months of the Trump administration.”

Reps Comer, Jordan Demand Fauci To Explain Possible ‘Discrepancy’ In Sworn Congressional Testimony (Daily Caller)
“House Oversight and Reform Committee Ranking Member James Comer and House Judiciary Committee Ranking Member Jim Jordan sent a letter Wednesday to White House senior medical adviser Dr. Anthony Fauci asking him to explain a possible ‘discrepancy’ in his sworn congressional testimony about taxpayer-funded gain-of-function research at the Wuhan Institute of Virology. In the letter, first obtained by Daily Caller, Comer and Jordan said it appears the NIH funded gain-of-function research and call on Fauci to clarify his May 2021 testimony, in which he stated under oath that the NIH has never funded gain-of-function research in the Wuhan Institute of Virology.”

The Pandemic’s Toll on Teen Mental Health (WSJ Opinion)
“The Centers for Disease Control and Prevention released a report last week warning that adolescent hospitalizations due to Covid-19 were on the rise. The media picked up the message and ran with it. But it isn’t true. The CDC misrepresented the data and played down a more important finding that provides further evidence that pandemic-control measures are likely having a serious adverse impact on young people’s mental health … while the CDC oversold the teen Covid narrative, it failed to emphasize the most troubling aspect of its study: 20% of teen hospitalizations in the study between Jan. 1 and March 31, 2021, were for psychiatric emergencies, not Covid.”

One Fate, Two Fates. Red States, Blue States: New Data Reveal a 432-Hour In-Person Learning Gap Produced by the Politics of Pandemic Schooling (The 74)
“Through the pandemic, schools in Republican states offered in-person learning at nearly twice the rate of those in Democratic states, according to new data, amounting to an estimated 66 additional days — or 432 hours — of face-to-face instruction for those students.  The numbers, provided to The 74 by the school calendar tracking website Burbio, deliver a cumulative view of schooling decisions throughout COVID-19 and reinforce evidence of a partisan divide long highlighted by researchers.”

The Power of Natural Immunity (WSJ Opinion)
“The news about the U.S. Covid pandemic is even better than you’ve heard. Some 80% to 85% of American adults are immune to the virus: More than 64% have received at least one vaccine dose and, of those who haven’t, roughly half have natural immunity from prior infection. There’s ample scientific evidence that natural immunity is effective and durable, and public-health leaders should pay it heed.” 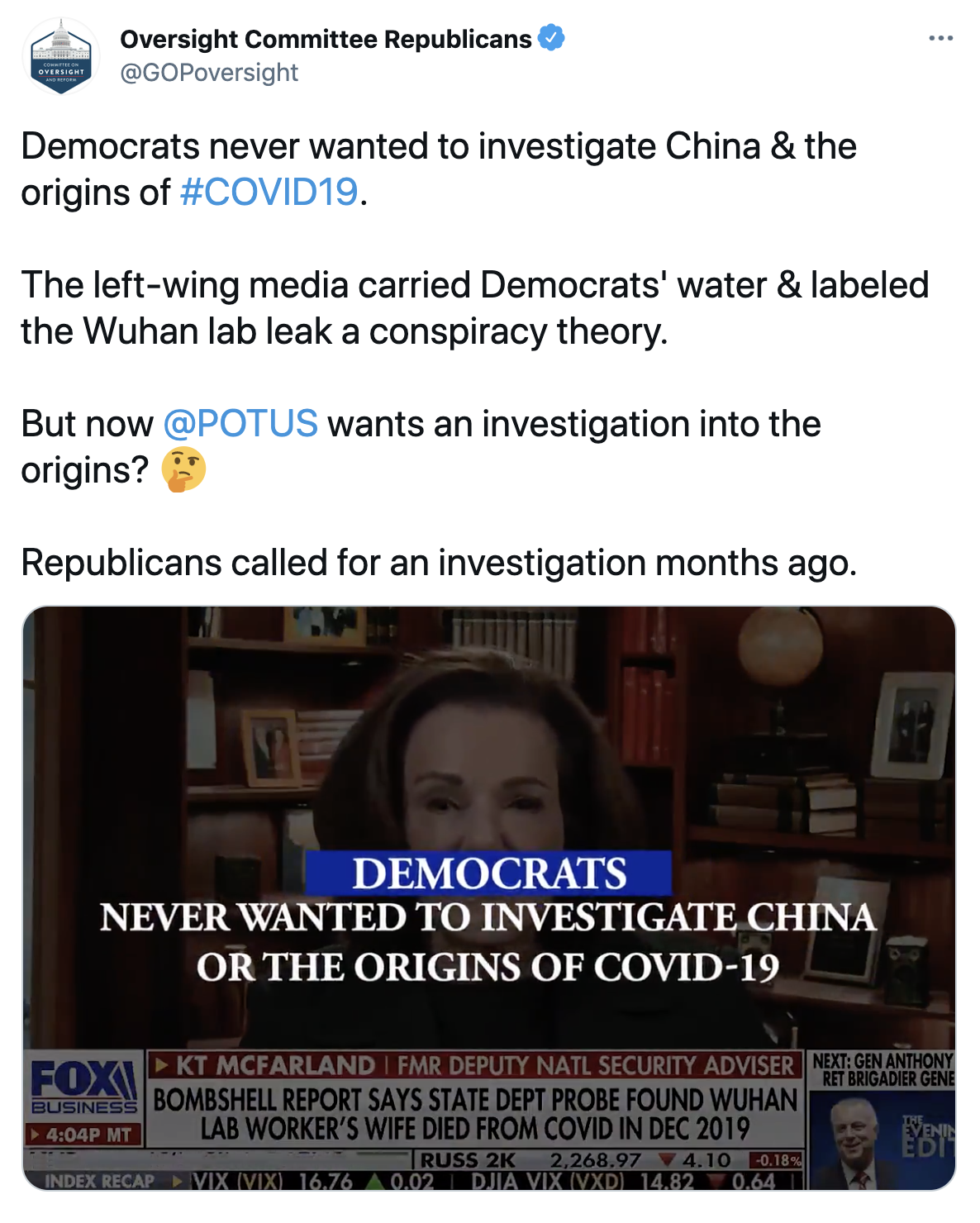 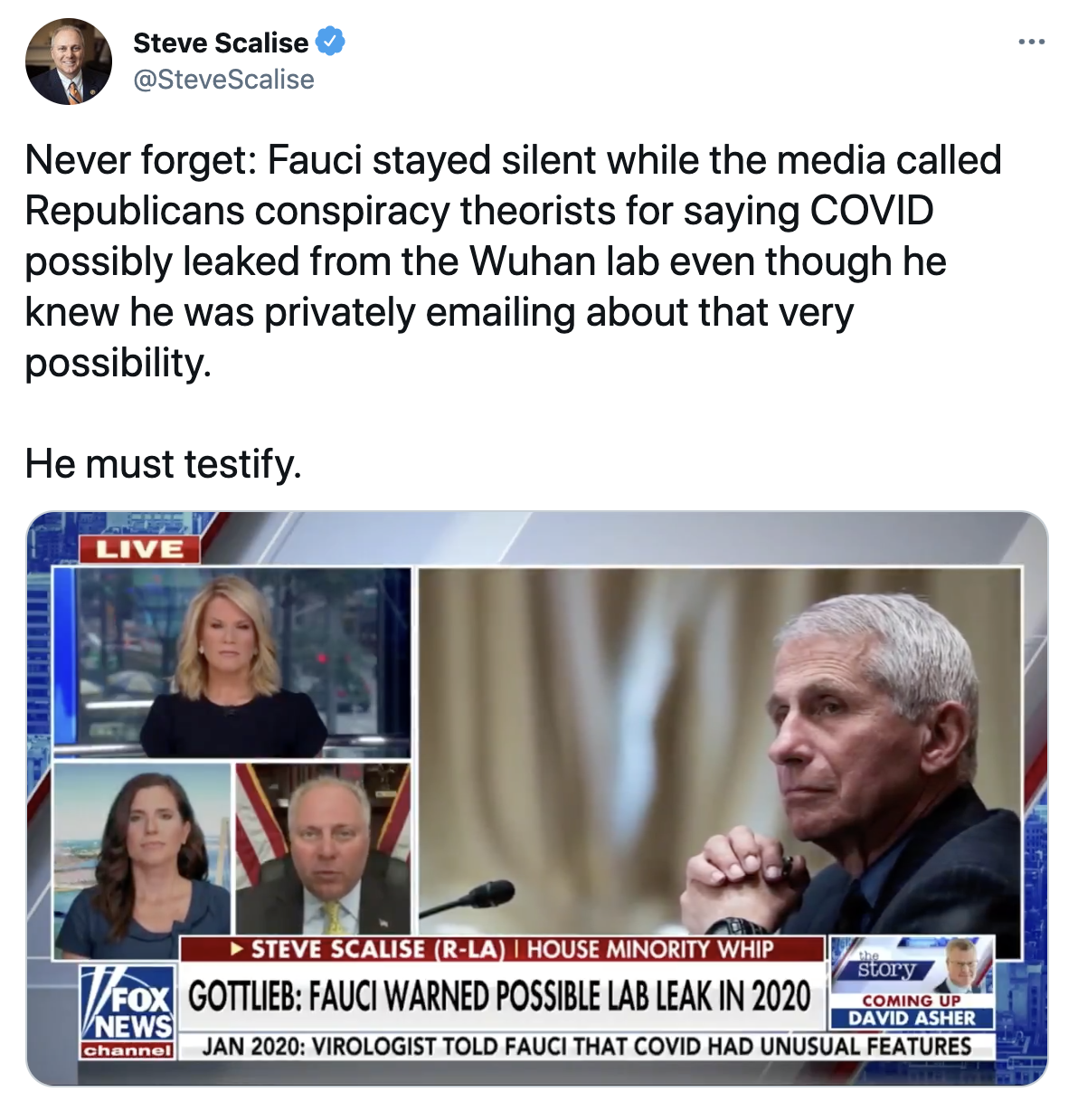 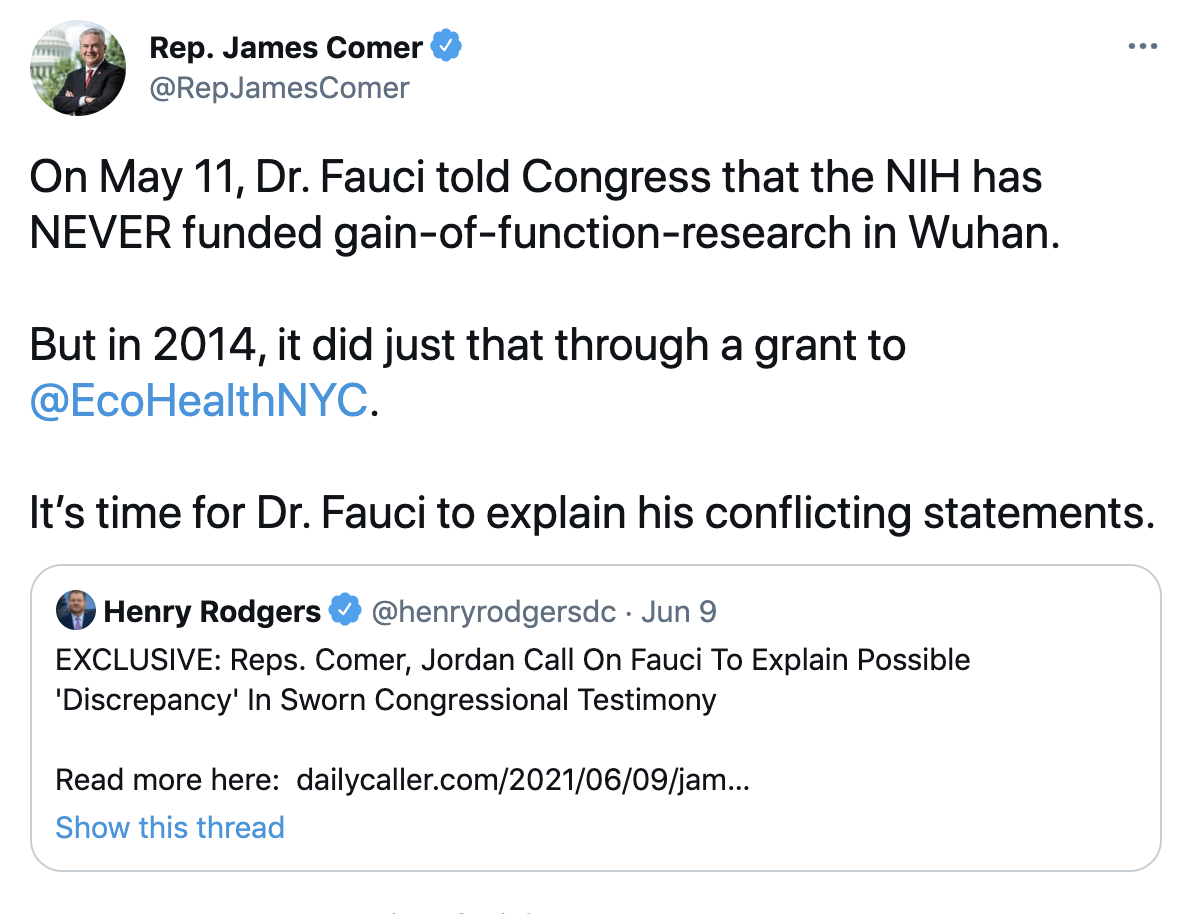 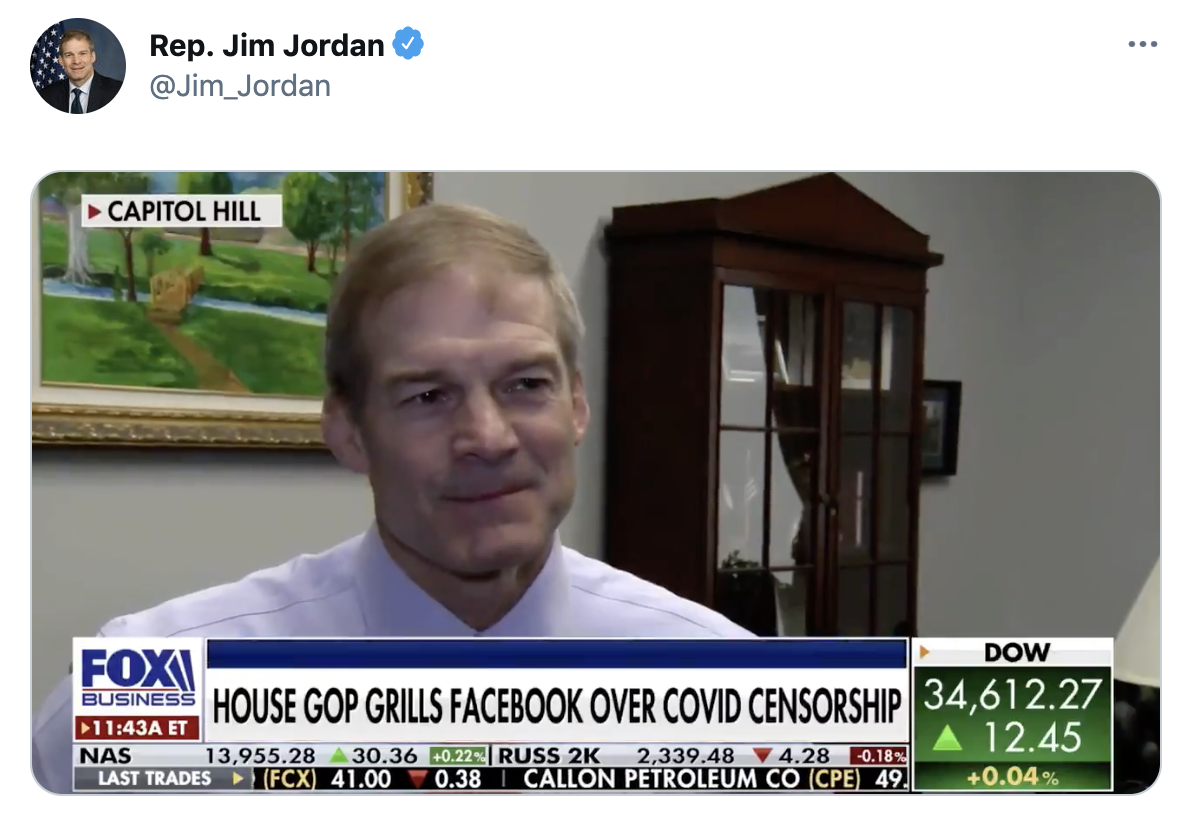 Energy and Commerce Republicans investigate when COVID-19 first arrived in the U.S. 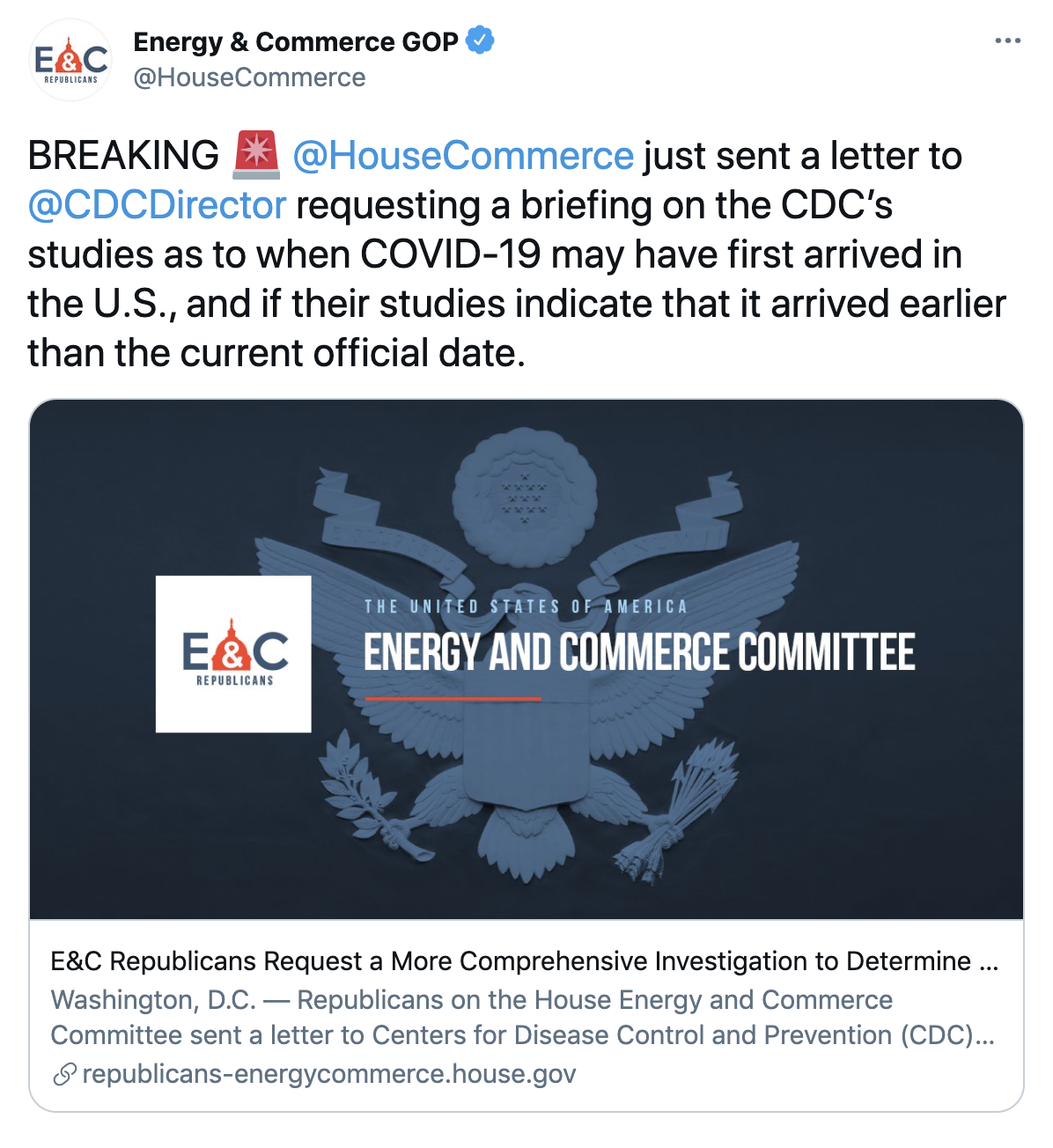 Ranking Members Comer (R-Ky.), Virginia Foxx (R-N.C.), Jason Smith (R-Mo.), and Kevin Brady (R-Texas) call on the Biden Administration to empower and encourage Americans to get back to work. 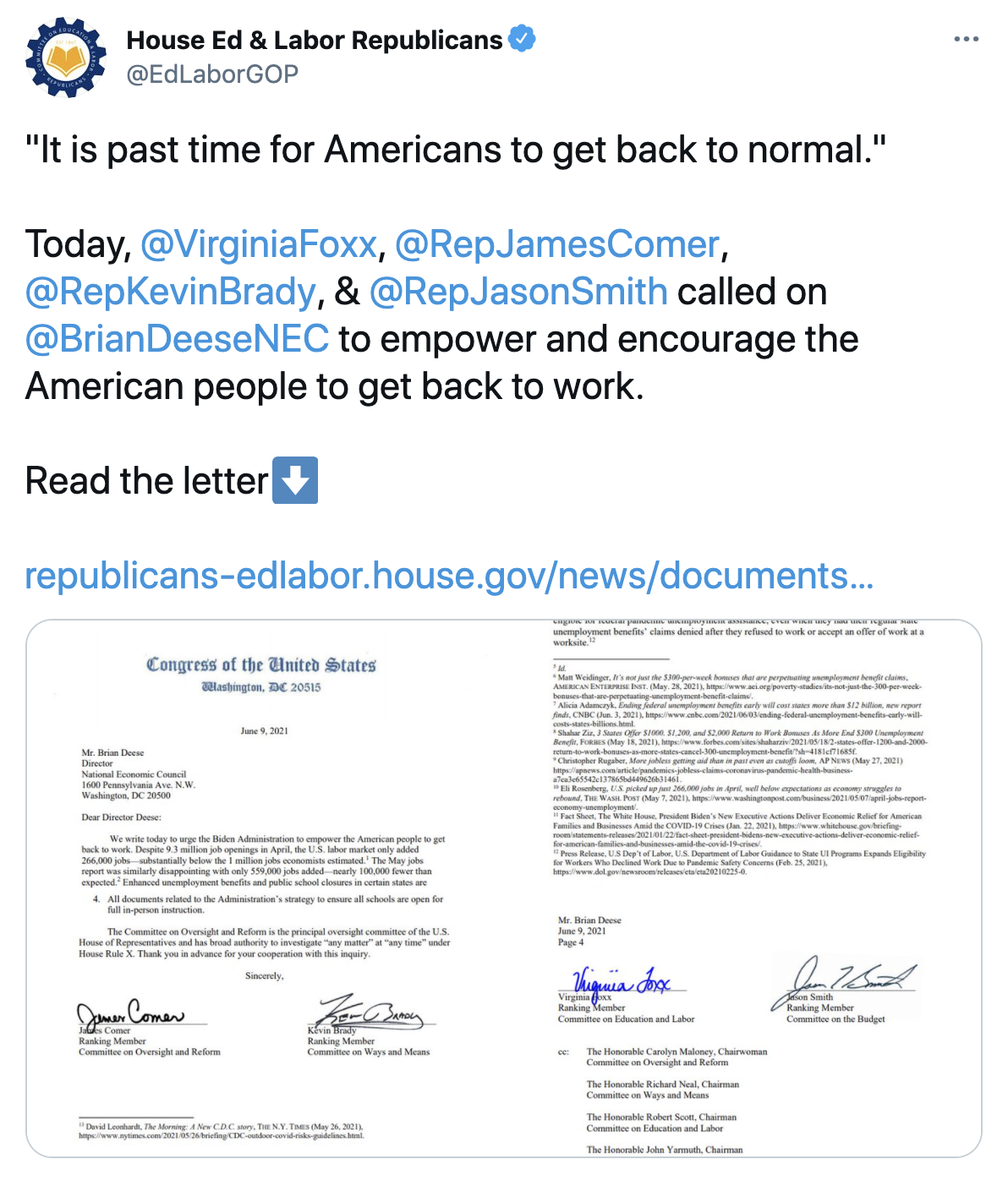