NIH Acknowledges that the United States Funded Gain-of-Function Experiments in Wuhan, Contradicting Fauci: A top NIH official admitted that U.S. taxpayers funded gain-of-function research on bat coronaviruses in Wuhan and revealed that EcoHealth Alliance, the U.S. non-profit that funneled NIH money to the Wuhan Institute of Virology, failed to comply with the terms of its grant. This means that Dr. Anthony Fauci was incorrect when he repeatedly said that U.S. tax dollars did not fund this type of research in Wuhan.

Vaccine Mandates and Employee Burnout Are Creating Health Care Worker Shortage: Across the country, hospitals are experiencing staffing shortages because front-line health care workers are being fired or suspended for not complying with COVID-19 vaccine mandates. Hospital workers are also quitting their jobs because they are feeling overworked. This departure of front-line health care workers has left hospitals struggling to care for their patients.

Secretary Buttigieg Took a Leave of Absence in the Midst of the Supply Chain Crisis: The American people are seeing a massive supply chain breakdown across the United States which has left them with empty shelves, and higher prices for products, at the grocery store. The Biden Administration has made it clear that this crisis is under the jurisdiction of the Department of Transportation, yet Secretary Buttigieg abandoned his responsibilities by secretly takingpaternity leave for two months.

Select Subcommittee Republican Memo Confirms the Public was Misled About Dangers of COVID-19 by China: In her testimony to the Select Subcommittee on the Coronavirus Crisis, Dr. Deborah Birx confirms the world was misled on the origins of COVID-19, President Biden is incorrectly blaming the unvaccinated and Republican governors for his own failures regarding COVID-19, and former New York Governor Andrew Cuomo violated federal guidance by sending COVID-19 positive residents back into nursing homes. House Republican Whip and Ranking Member of the Select Subcommittee on the Coronavirus Crisis Steve Scalise (R-La.) called out President Biden and Congressional Democrats for politicizing COVID-19 and refusing to acknowledge China’s complicity in the early spread of COVID-19.

“The N.I.H. also sent Representative Comer a final progress report that EcoHealth Alliance submitted to the agency in August. In the report, the researchers describe finding that WIV1 coronaviruses engineered to carry spike proteins were more virulent. They killed infected mice at higher rates than did the WIV1 virus without spikes from the other coronaviruses. The filing had been submitted late, the N.I.H. said, nearly two years beyond the grant-specified deadline of 120 days from completion of the work. ‘Delayed reporting is a violation of the terms and condition of N.I.H. grant award,’ Renate Myles, a spokeswoman for the agency, said. Jesse Bloom, a virologist at the Fred Hutchinson Cancer Center who has called for more research into the origins of the pandemic, said the revelations raised serious questions about the risks of investigating viruses originating from animals, known as zoonotic viruses.”

“President Biden told unvaccinated Americans this month: ‘We’ve been patient, but our patience is wearing thin. . . So, please, do the right thing.’ He backed up this request with a series of new regulatory mandates, including one from the Occupational Safety and Health Administration, which directs businesses with 100 or more employees to make vaccination a condition of employment. The Covid vaccine has been widely hailed as a modern scientific miracle. Yet as a means to increase nationwide vaccination rates, the OSHA mandate far exceeds the authority Congress granted the agency, and if the president can order private companies to dictate such terms of employment, his power to coerce citizens in the name of public health might as well be unlimited. This would both be profoundly unconstitutional and fundamentally transform the relationship between the government and the people.”

“The number of individuals enrolled in the U.S. education system dropped by 2.9 million from 2019 to 2020, according to new data released Tuesday by the U.S. Census Bureau. This marks the lowest level of school enrollment for those under 35 years old in over 20 years, per the Census Bureau. The dip was evident across age groups. The percentage of 3- to 4-year-olds enrolled in school dropped from 54% in 2019 to 40% in 2020, making it the first time since 1996 that fewer than half of the kids in this age group were enrolled in school. Three- to 4-year-old children of working mothers also saw a greater drop in nursery school enrollment than others of the same age group.”

“America’s coronavirus outbreak is rapidly improving as the Delta wave recedes, and vaccines for kids — which could become available within weeks — will help the situation improve even further. Nationwide, the U.S. is now averaging about 79,000 new cases per day — a 22% drop over the past two weeks. COVID-19 deaths have fallen by 14% over the same period, to an average of 1,600 per day. Hawaii has the lowest number of new cases relative to its population, followed by Florida and Louisiana — which were hotbeds for the virus this summer. Alaska, Montana and Idaho have the highest number of cases relative to their populations. Cases per capita are also creeping up in New England. Experts are cautiously optimistic that the virus will continue to lose ground throughout the U.S.”

House Oversight Committee Ranking Member James Comer (R-Ky.)emphasizes that documents from the National Institute of Health contradict Dr. Fauci’s claims that the NIH did not fund gain-of-function research in Wuhan. 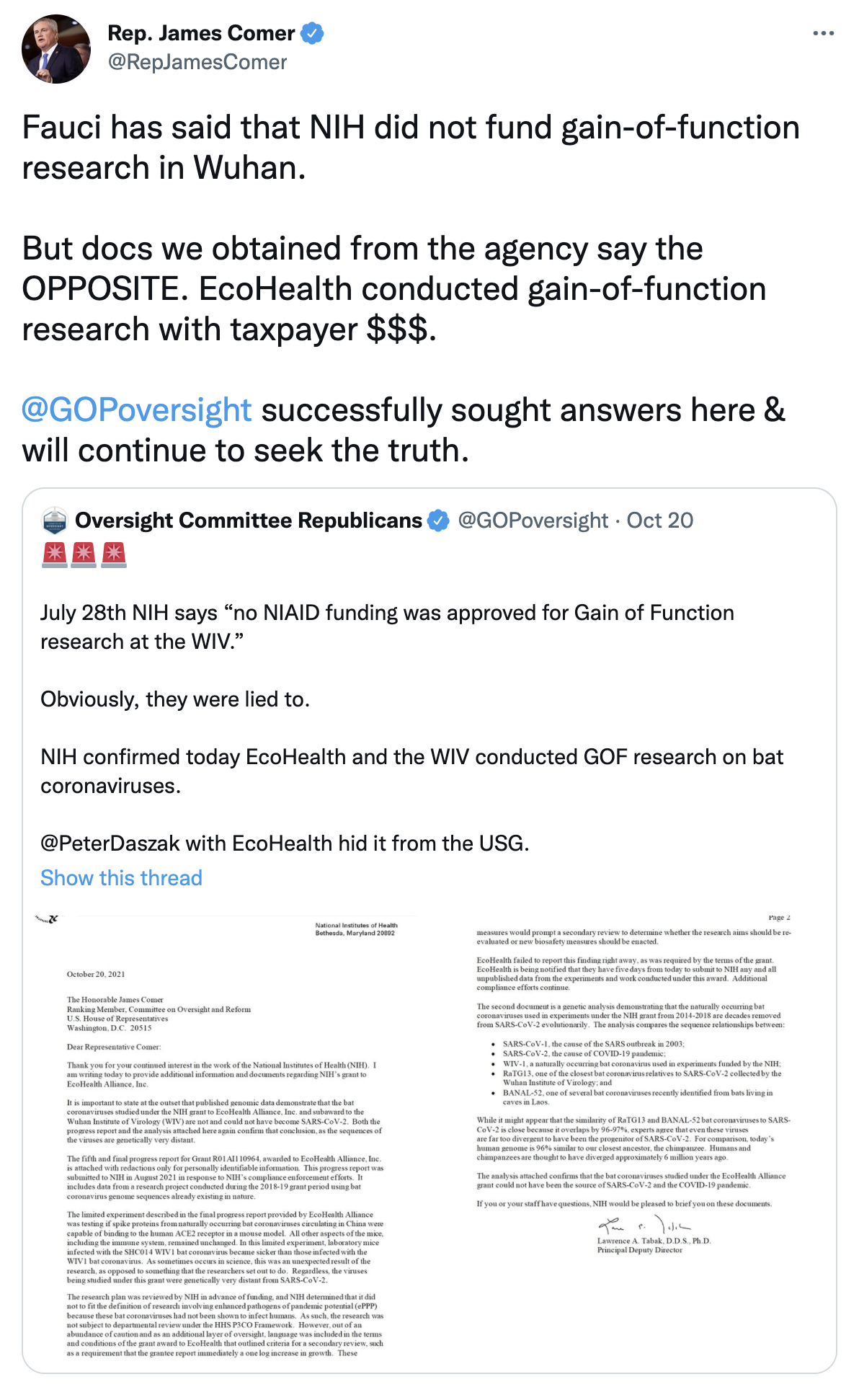 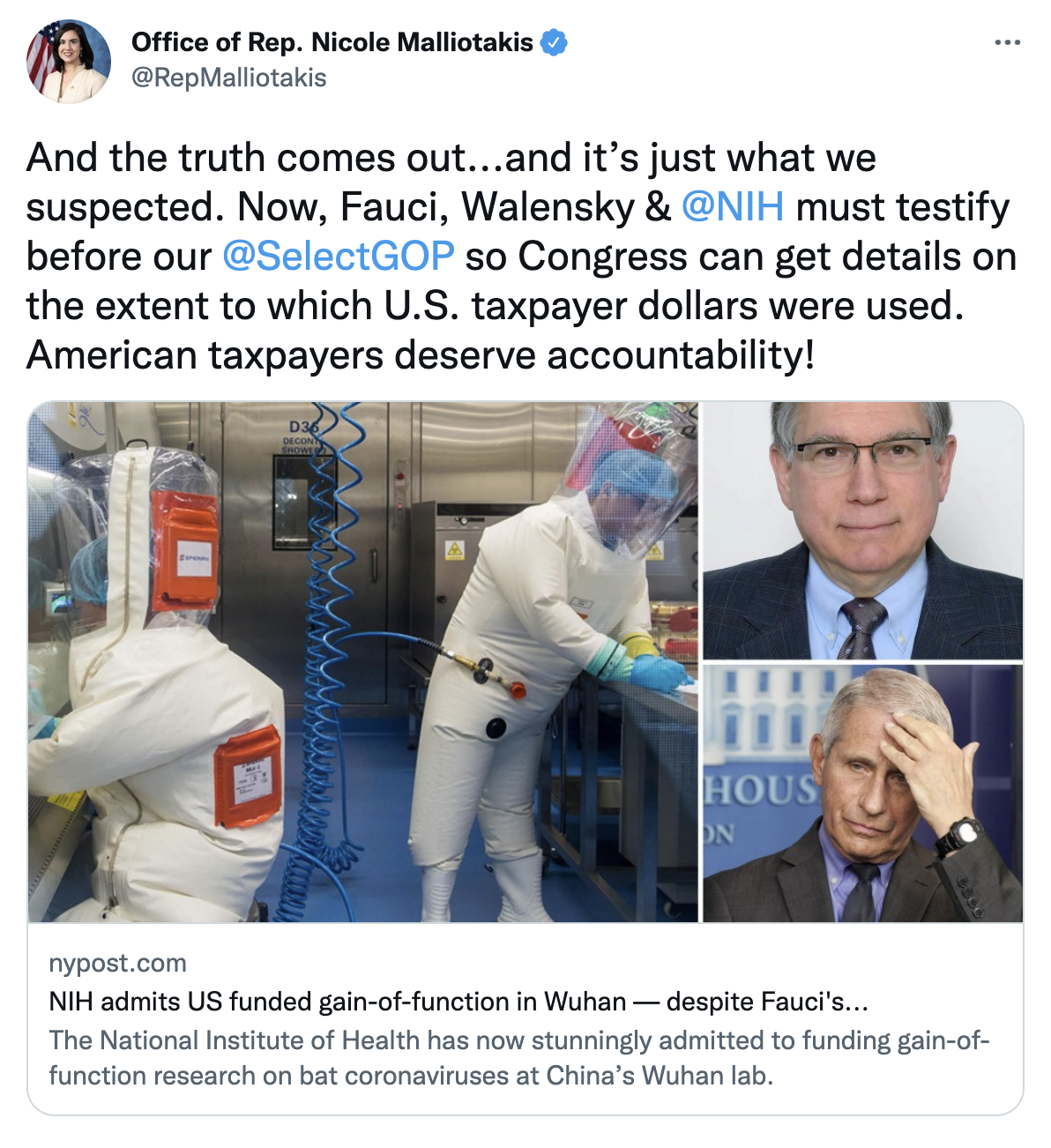 Representative Mariannette Miller-Meeks (R-Iowa) calls for investigating the use of U.S. tax dollars for funding gain-of-function research in Wuhan. 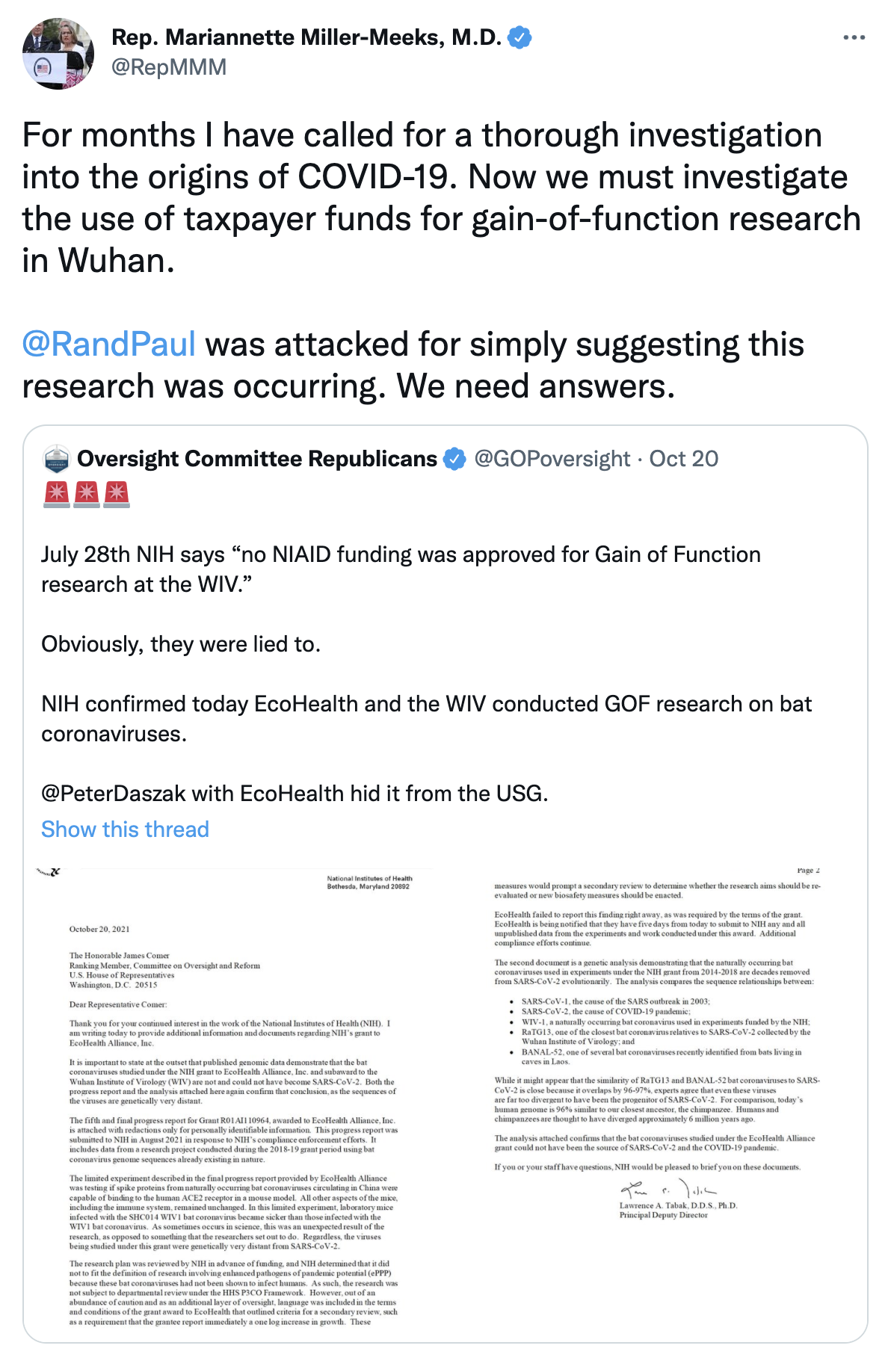 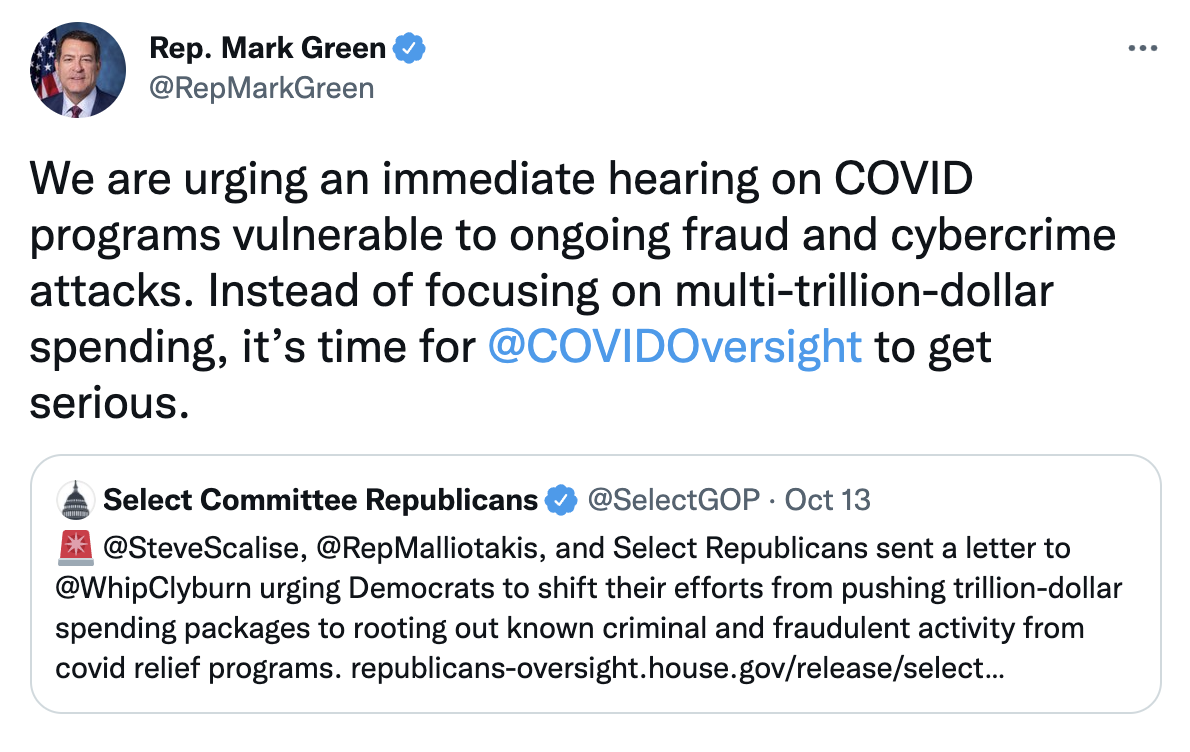