Whip Scalise also expressed his support for the people of Southwest Louisiana, and everyone across the state, ahead of the upcoming impacts from Hurricane Delta. 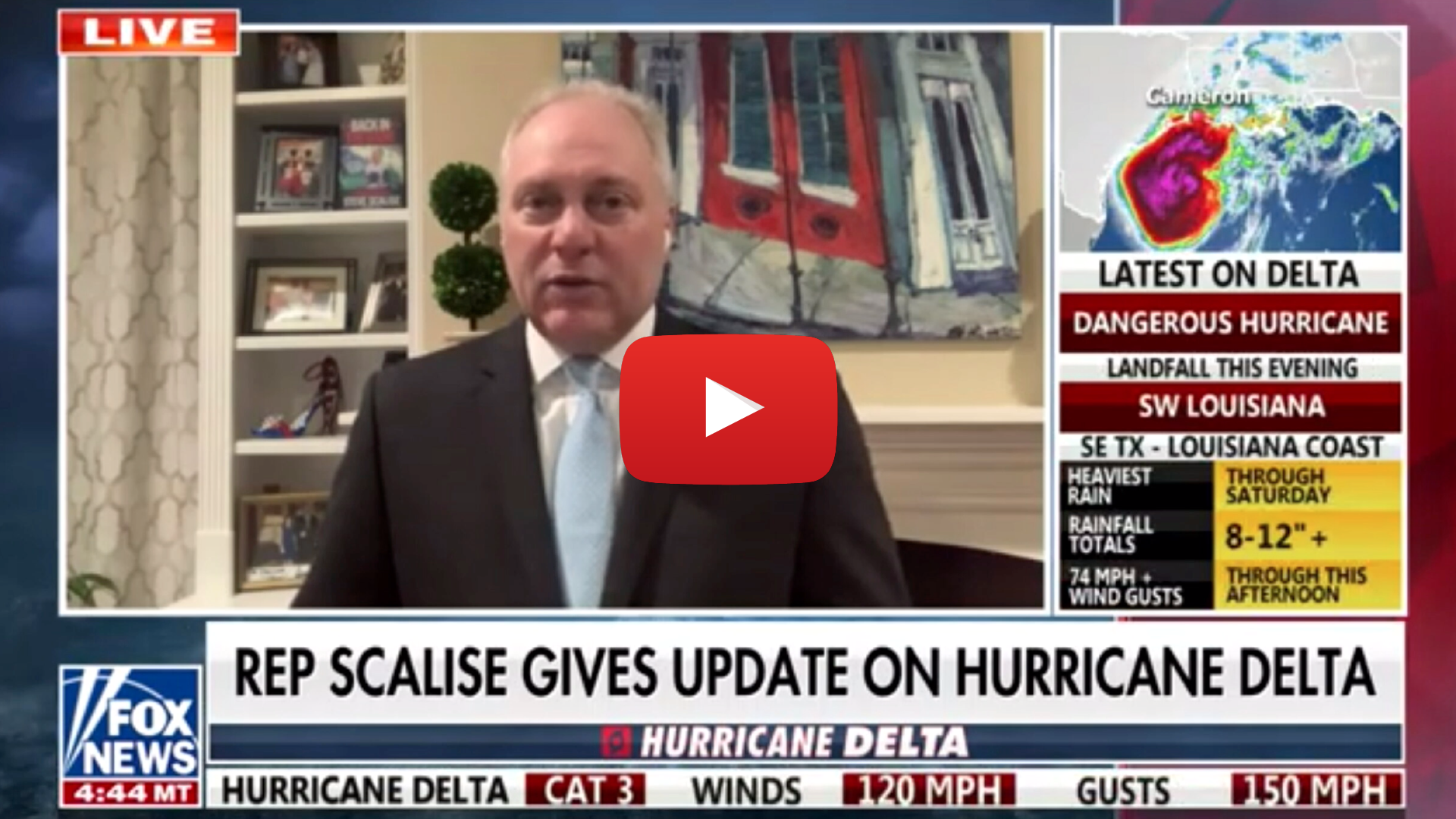 Click here or on the image above to watch the interview.

On Hurricane Delta in Southwest Louisiana:

“Our prayers are with the people of Southwest Louisiana. Especially when you look at Lake Charles, when you look at the fact they are still recovering from Hurricane Laura and here we go again. People just had to be removing some of the debris that’s still on the ground yesterday to try to clear up some of the debris from Laura as this storm approaches. So, you know, every storm you take seriously, but when you’re on the heels of recovering from a major storm just a few weeks ago, it’s a double blow to especially the people of Lake Charles. But we pray for everybody in the direct path of this hurricane.”

On Speaker Pelosi’s obsession with overturning the results of the last presidential election:

“Well, first of all, this shows you just how misplaced Speaker Pelosi’s priorities are. We should be in Washington helping families that are struggling and recovering, and small businesses that would love another round of Paycheck Protection Program funding, where there is massive bipartisan support for Congressman Chabot’s bill to give them another round of PPP funding. That could be passed tomorrow but she’s not bringing us back for that.”

“She has been fixated for the last four years with overturning the results of the last election. And here she is again on the heels of Vice President Pence winning handily in the debate against Kamala Harris. She’s now trying to overturn the results of next month’s election. She’s wanted to remove President Trump from office because she doesn’t agree with the people’s choice from the last election. Look, they started with the Russia hoax. They did impeachment. This is what she’s spent and wasted her Speakership on. She should be fighting for families and small businesses, not trying to overturn the results of the election because she knows how well President Trump’s doing. And, by the way, what a signal that is to Joe Biden that she’s spending her time trying to remove President Trump from office because clearly she must not have confidence in Joe Biden’s abilities.”

“Clearly, it’s to distract away from the fact that [Democrats] can’t tout anything about Joe Biden. Vice President Pence literally the night before had done such an incredible job laying out President Trump’s agenda. What President Trump did to get this economy back on track from the failed years of Obama and Biden. How he’s confronting COVID. We’re literally on the verge of four different internationally respected companies being approved by the FDA, which is the gold standard for drug certification, on the verge of vaccines that are being done because of President Trump’s leadership, by the way, in record time. And what is she doing? Not helping families. Families need help. Instead she is trying to overturn the results of the election yet again.”

“It’s so sad to see how she is trying to inject politics into something that, again, I mean, just like Bernie wasn’t responsible [for the attack on the baseball field] – if crazy people try to do crazy things, thank God there was law enforcement there in my case to protect everybody on the baseball field. Thank God there was President Trump’s Justice Department to stop and thwart this plot. For her to go and continue these lies, I mean, President Trump, how many times have you heard President Trump denounce racism across the board? He has done it multiple times. And they know that. They want to keep just perpetrating a lie. But at a time like this to do it, when it was literally President Trump’s Justice Department that stopped this from even happening, you know, it’s just sad that some people literally want to use every single day to try to confuse the public, to try to lie, because they are scared to death that President Trump is going to get reelected, including by voters in Michigan.

“I was in Michigan a few weeks ago. There is so much excitement and support for President Trump because of things he did to get Michigan back on track. Pennsylvania, Minnesota, all of these states that are turning around from the failed years of Obama and Biden. This is where we are in politics but fortunately, President Trump continues to do his job to fight for those people every single day and to protect people, even like Governor Whitmer.”