Biden’s CDC Allows Teachers Union to Meddle in Scientific Guidance: Last week, the president of the American Federation of Teachers (AFT), Randi Weingarten, admitted during an interview on C-SPAN that the U.S. Centers for Disease Control and Prevention (CDC) asked them for language on school reopening guidance.

Mounting Evidence COVID-19 Escaped Wuhan Lab: According to U.S. intelligence reported recently in the media, three researchers from the Wuhan Institute of Virology became sick “with symptoms consistent with both COVID-19 and common seasonal illness” and were hospitalized in November 2019.

Pelosi Refuses to Follow the Science: Despite the CDC recently recommending vaccinated Americans can resume normal activities, Speaker Pelosi refuses to return the House of Representatives to pre-pandemic operations and is still requiring all to wear masks.

“We write today to request that you cease all proxy voting measures and all remote committee proceedings in the House of Representatives for the remainder of the 117th Congress. It is time we follow the science, lead by example, and fully return to work to serve the American people. More than 272 million COVID-19 vaccine doses have been administered and at least 75 percent of members of Congress have been fully vaccinated, with all members and congressional staff having access to the vaccine … We have accomplished an incredible milestone in defeating the virus, now we must serve as a model for our nation to restore, rebuild, renew, and resume America.”

The CDC recently issued updated guidance recommending fully vaccinated people no longer need to wear a mask or social distance in most indoor and outdoor settings. The Office of the Attending Physician also issued guidance that fully vaccinated members and staff can resume pre-pandemic activities. However, Speaker Pelosi is ignoring recommendations from medical experts and refusing to follow science by keeping in place restrictive pandemic measures.

Pelosi Undermines Confidence in Vaccine Efficacy: By refusing to restore normal operations to the House of Representatives, Speaker Pelosi is undermining the vaccine’s efficacy. This follows then-candidate Joe Biden and Kamala Harris’ damaging remarks on the campaign trail that called into question the safety of the COVID-19 vaccines in development under Operation Warp Speed. Democrats are already requiring taxpayers to foot the bill for a $1 billion PR campaign to encourage Americans to get the COVID-19 vaccine. Why do they continue to undermine the vaccine’s efficacy by requiring pandemic restrictions that are no longer recommended by the CDC?

Democrats Continue Refusing to Investigate COVID Origins: According to U.S. intelligence reported recently in the media, three researchers from the Wuhan Institute of Virology became sick “with symptoms consistent with both COVID-19 and common seasonal illness” and were hospitalized in November 2019. Despite mounting evidence—and even support from Dr. Fauci to look into the origins of COVID-19—Select Subcommittee Democrats continue to refuse to look into how COVID-19 surfaced.
Cuomo Granted Special Access to COVID Tests for Family Member and Donors, but Democrats Still Refuse to Hold Him Accountable: During the early days of the COVID-19 pandemic, New York Governor Andrew Cuomo’s administration granted special access to COVID-19 testing to his family members, friends, lobbyists, and other influential people. Meanwhile, he mandated untested and COVID-19 positive patients to be admitted to nursing homes and long-term care facilities. Republicans have repeatedly called on Democrats to compel Governor Cuomo to testify before Congress, but they refuse to hold him accountable despite the growing evidence of his wrongdoings.

Biden’s CDC Allows Teachers Union to Meddle in Scientific Guidance: Last week, the president of the AFT, Randi Weingarten, admitted during an interview on C-SPAN that the CDC asked them for language on school reopening guidance. Weingarten said, “They asked us for language and we gave them language.”  The language included in the official report effectively recommended 90% of schools remain closed, even though medical experts say there is no reason for schools to be shuttered. The AFT is not a medical or scientific group. They are a political group that donates millions to Democrats’ reelection campaigns. Why is the Biden Administration allowing a political group to meddle in official scientific guidance?

Republicans Slam Biden for Giving Away Vaccine Patents, Allowing Teachers Union to Draft Scientific Guidance: At last week’s hearing, Republican Whip and Ranking Member of the Select Subcommittee on the Coronavirus Crisis Steve Scalise (R-La.) blasted President Biden for supporting a plan that would force American developers to relinquish their intellectual property rights to COVID-19 vaccines and therapeutics and strip innovators of their constitutionally protected patents. Whip Scalise called out the President for wanting to give America’s intellectual property to the Chinese Communist Party, which would undermine innovation and weaken the United States’ international competitiveness.
Representative Mariannette Miller-Meeks (R-Iowa) called out the Biden Administration and the CDC for allowing the AFT to meddle in and draft scientific guidance regarding reopening schools. She chastised Select Subcommittee Democrats for refusing to investigate the AFT’s influence on the CDC’s guidance and emphasized reopening America’s classrooms should be governed by medical science.

How America failed students with disabilities during the pandemic (Washington Post)

“More than a year after the pandemic began, officials in school districts across the country concede they failed during the crisis to deliver the quality of education that students with disabilities are legally entitled to receive. The consequences of this failure are likely to linger for years, if not decades, advocates and experts warn. More than 7 million students are eligible for special educational services under the federal Individuals with Disabilities Education Act (IDEA). These children, each of whom follow an individualized education program that spells out what extra or different services they need at school, account for an estimated 14 percent of all U.S. schoolchildren.”

“The reported number of COVID-19 hospitalizations, one of the primary metrics for tracking the severity of the coronavirus pandemic, was grossly inflated for children in California hospitals, two research papers published Wednesday concluded. The papers, both published in the journal Hospital Pediatrics, found that pediatric hospitalizations for COVID-19 were overcounted by at least 40 percent, carrying potential implications for nationwide figures.”

“Federal prosecutors have been looking into whether Gov. Andrew M. Cuomo’s administration granted special access to rapid coronavirus test results for the governor’s family and other influential people, according to two people with knowledge of the discussions … the special treatment for Mr. Cuomo’s family has lasted far longer than previously known, through at least last month, The Times found.

On April 3, the day before Easter, one of Mr. Cuomo’s daughters, Mariah Kennedy Cuomo, and her boyfriend, Tellef Lundevall, were tested at a state-run site in Albany, N.Y., and the samples were labeled a priority — “specials,” as they were known inside the Health Department — before being rushed for processing at the state’s Wadsworth Center laboratory nearby.”

“House Minority Leader Kevin McCarthy, R-Calif., and the House GOP Doctors Caucus are introducing a resolution to update the House mask policy so it reflects the Centers for Disease Control and Prevention’s (CDC) newest guidance for vaccinated people. McCarthy and the Republican doctors introduced the privileged resolution to force a vote on changing the House mask policy to reflect the CDC’s newest guidance that gave vaccinated Americans the OK to ditch their masks indoors in most settings.”

’Three researchers from China’s Wuhan Institute of Virology became sick enough in November 2019 that they sought hospital care, according to a previously undisclosed U.S. intelligence report that could add weight to growing calls for a fuller probe of whether the Covid-19 virus may have escaped from the laboratory. The details of the reporting go beyond a State Department fact sheet, issued during the final days of the Trump administration, which said that several researchers at the lab, a center for the study of coronaviruses and other pathogens, became sick in autumn 2019 ‘with symptoms consistent with both Covid-19 and common seasonal illness.’” 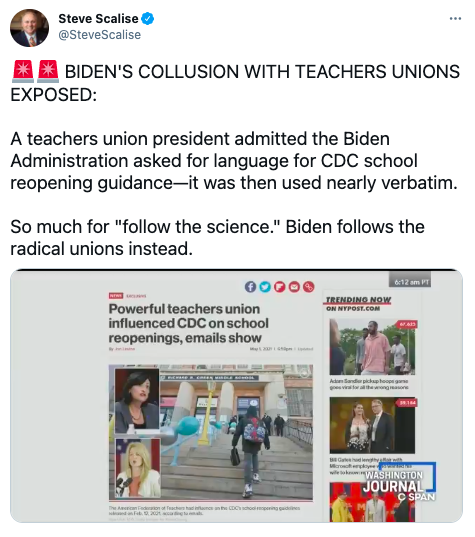 Rep. Miller-Meeks (R-Iowa) blasts the CDC for allowing the American Federation of Teachers to meddle in scientific guidance. 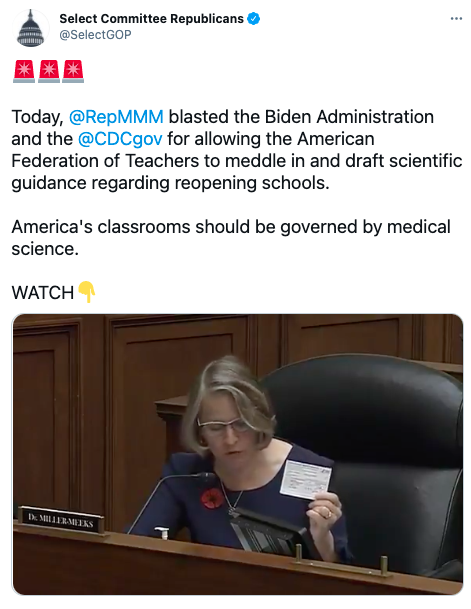 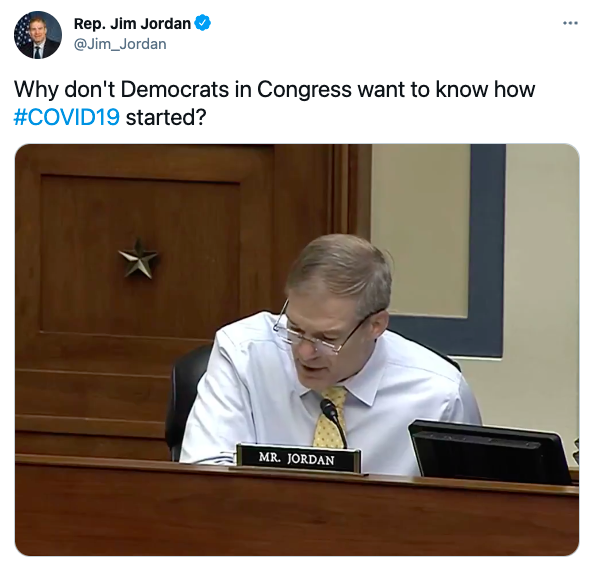 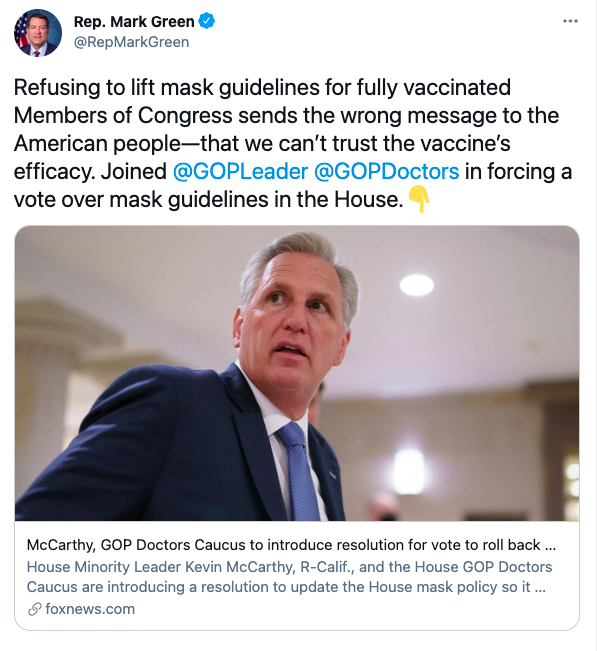 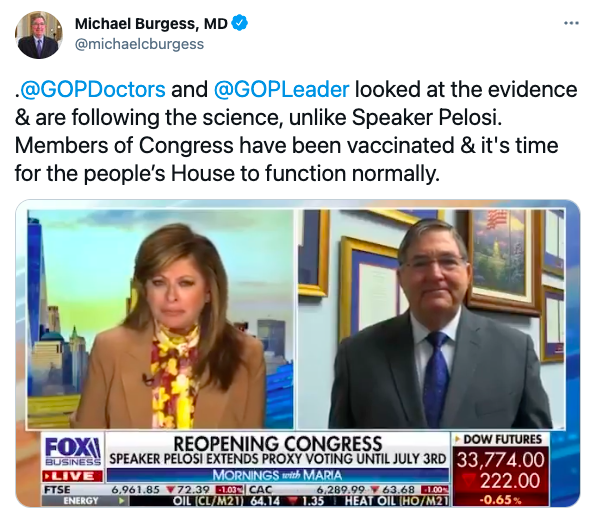 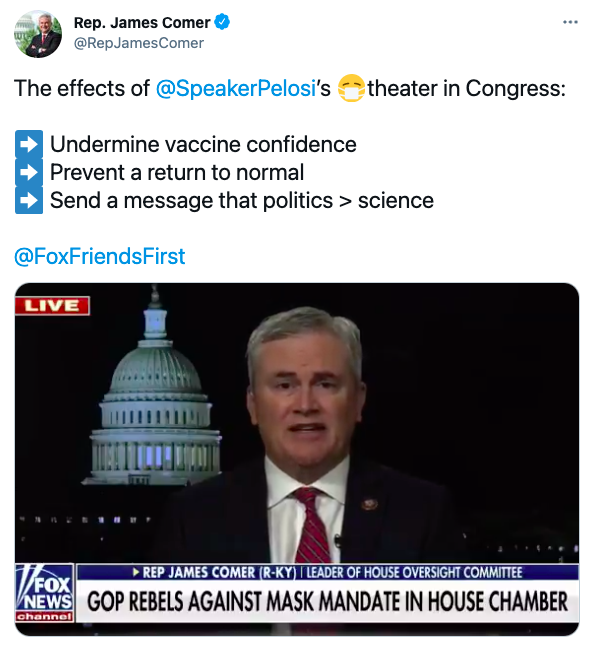 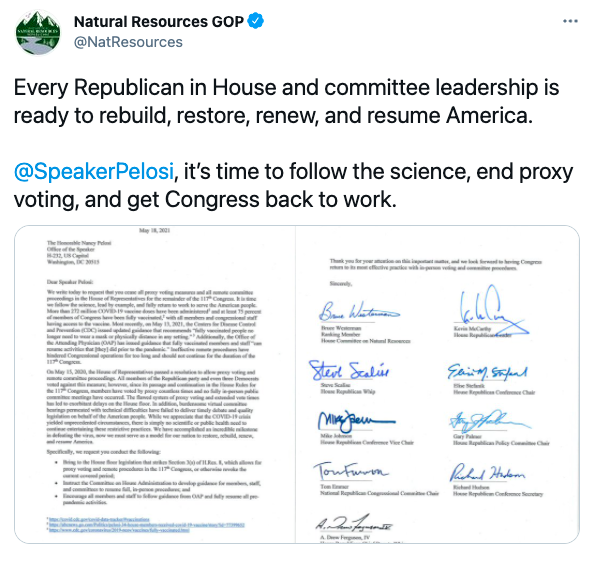 Republican Whip and Select Subcommittee Ranking Member Scalise (R-La.) points out how Operation Warp Speed led to the fastest development of a vaccine in history and is producing results to end the pandemic. 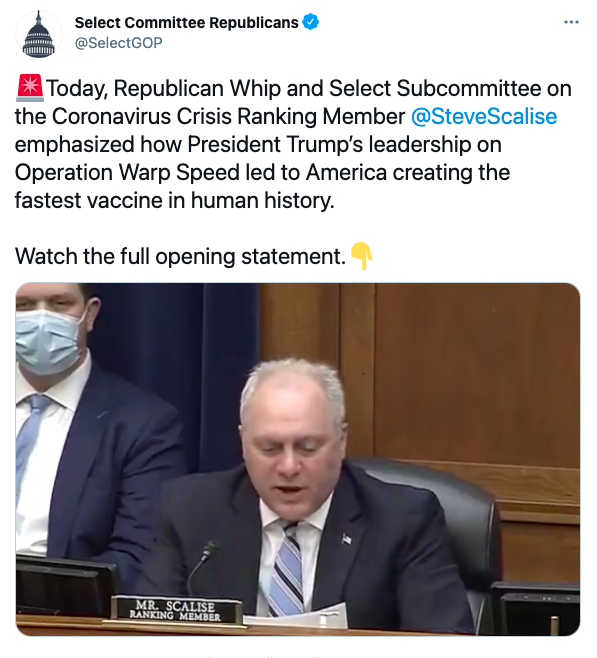 Oversight Republicans point out Democrats have refused calls to conduct a bipartisan investigation into the impact school closures have had on students with disabilities. 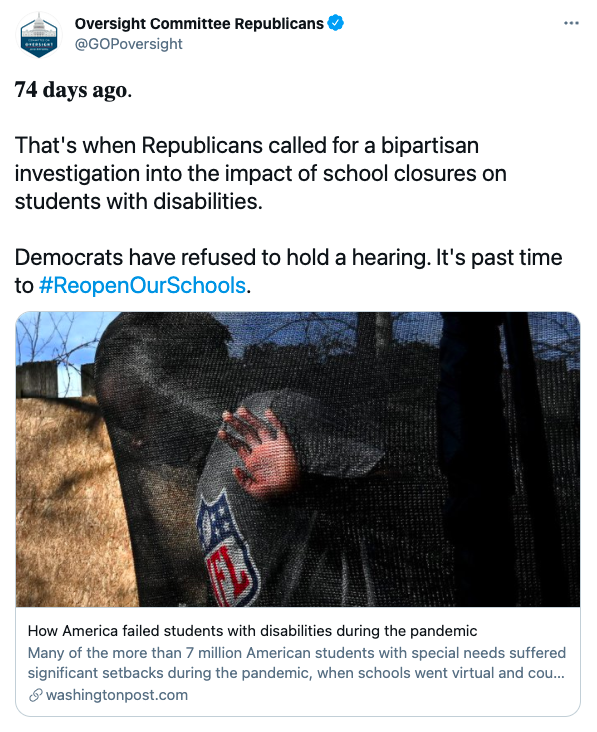