CDC Finally Admits Vaccinated Can Ditch the Mask: Last week, the CDC finally issued recommendations that Americans who have been vaccinated no longer have to wear a mask in most indoor and outdoor settings.

Select Subcommittee Republicans Launch Probe into Political Interference at the CDC: Republican lawmakers on the Select Subcommittee and House Committee on Oversight and Reform launched a probe into improper outside influence on the Centers for Disease Control and Prevention (CDC) school reopening guidance by the American Federation of Teachers (AFT).

Union Boss Finally Says Teachers Can Return to Classrooms: Last week, Randi Weingarten, the AFT president, finally called for the full reopening of schools this fall after ignoring the science for months.

CDC Finally Updates Outdated Mask Recommendations for Americans: Last week, the CDC finally issued revised recommendations for vaccinated Americans that they no longer have to wear a mask in most indoor and outdoor settings. These recommendations are long overdue. Cases and fatalities are plummeting, the vaccine is proven to be safe and effective, and there are very few breakthrough cases. But the CDC’s guidance does not go far enough. Young children ages two and older are still required to wear a mask, even though the science shows COVID-19 is less dangerous for them than the flu.

Democrats Paying Americans Not to Work: Despite 7.4 million job openings in April, the U.S. labor market only added 266,000 jobs. The Democrats’ recent spending bill provided an additional $300 a week in unemployment benefits through September. An estimated 40% of the unemployed now earn more staying at home than working, causing severe labor shortages across the country and impacting numerous industries, including hospitality, retail, construction, and manufacturing.

Recently, several Republican states have announced plans to opt out of federal unemployment benefits programs in order to encourage Americans to get back to work and some have offered back-to-work bonuses. Republican Leader Kevin McCarthy (R-Calif.), Republican Whip Steve Scalise (R-La.), Ways and Means Committee Ranking Member Kevin Brady (R-Texas), and Rep. Jackie Walorski (R-Ind.) sent a letter to governors calling on them to follow these Republican governors lead.

Pelosi Can’t Quit Pandemic Restrictions:  Despite the CDC issuing guidelines that vaccinated Americans no longer have to wear a mask indoors and outdoors in most settings, Speaker Pelosi continues to peddle misinformation and require all members to wear masks in the House chamber. When will Speaker Pelosi follow the science and listen to the experts?

Union Boss Finally Says Teachers Can Return to Classrooms: Last week, Randi Weingarten, the president of the second largest teachers union, finally called for the full reopening of schools this fall. Medical experts have stated for months there is no medical reason for schools to remain closed, but this didn’t stop the AFT from interfering in the CDC’s Operational Strategy which effectively advised 90% of schools to remain closed. It’s past time the union bosses follow the science and return to classrooms.

Biden Gets Bossy: After the CDC issued revised mask recommendations for vaccinated Americans, President Biden arrogantly tweeted, “The rule is now simple: get vaccinated or wear a mask until you do. The choice is yours.” To be clear, there is no rule; only health recommendations.

According to emails obtained by Americans for Public Trust, the AFT was provided a pre-release copy of the CDC’s school reopening guidance and successfully lobbied the CDC to change its final guidance that advised keeping more than 90% of schools closed. Currently, less than 50% of schools are fully reopened, despite experts saying there is no medical reason students cannot return to in-person learning.

Select Subcommittee Democrats Remain Silent on Union’s Influence on CDC Guidance: Select Subcommittee Democrats have unilaterally issued seven oversight letters and a subpoena regarding alleged political interference at the CDC during the Trump Administration, but they are conspicuously silent regarding this example of influence by an outside political donor. Republicans will not stand by and allow Democrats to play politics with the educational future of our children’s education.

“A group of over 20 House Republicans sent a Tuesday letter to the director of the Centers for Disease Control and Prevention (CDC) saying they will be launching a probe into improper outside influence on the CDC school reopening guidance by the American Federation of Teachers (AFT). The letter, first obtained by Daily Caller, demanded that the CDC director, Dr. Rochelle Walensky, hand over communications about the February decision on school reopening.”

“American Federation of Teachers President Randi Weingarten on Thursday hopped onto the caboose that has already left the station. ‘There is no doubt: Schools must be open. In person. Five days a week,’ the teachers’ union chief declared in a speech. That’s nice of her to say now that nearly all school districts have announced plans to return to in-person learning five days a week next fall amid growing pressure from parents. Countless studies have shown that schools aren’t major causes of Covid spread, and younger children are unlikely to transmit the virus.” 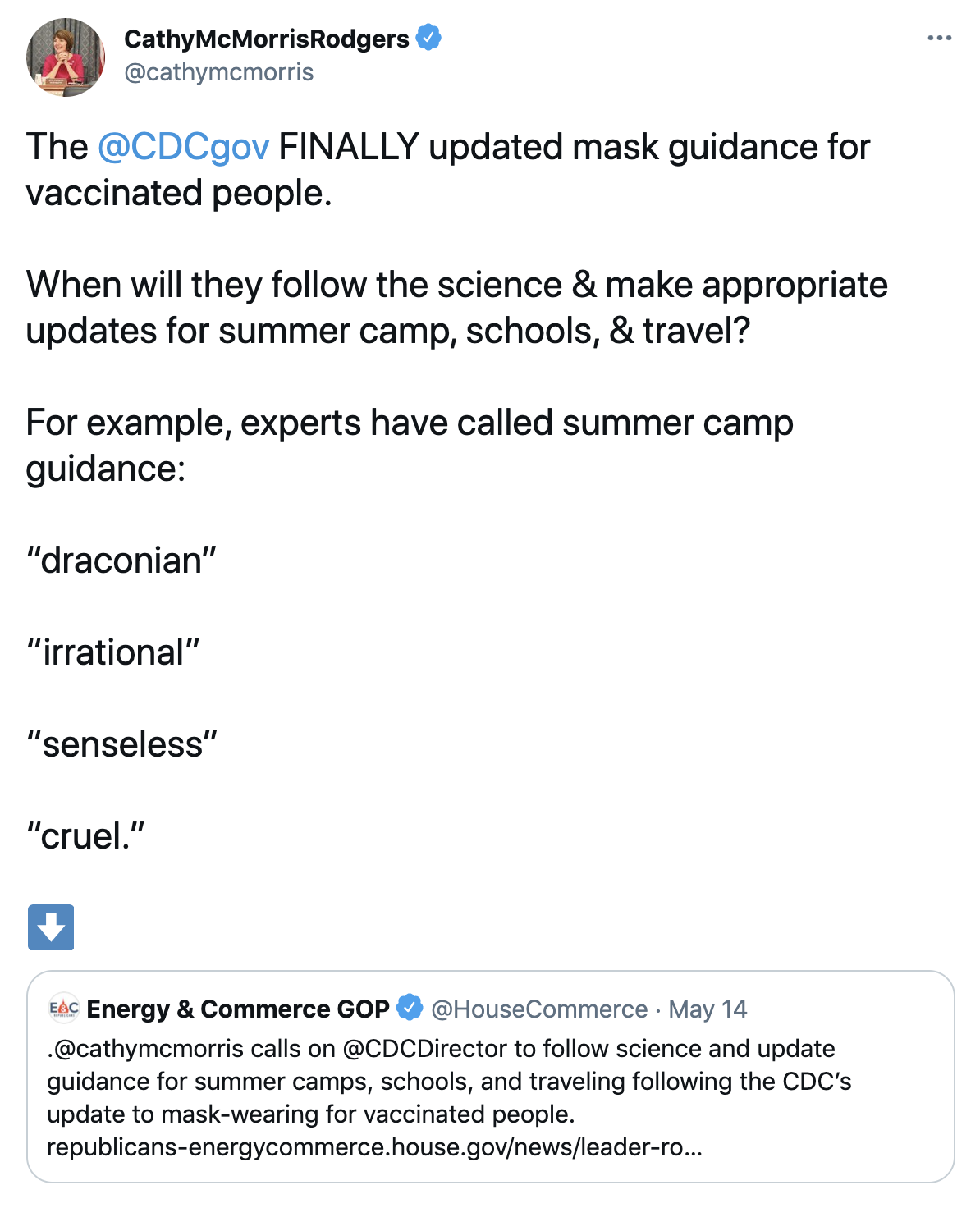 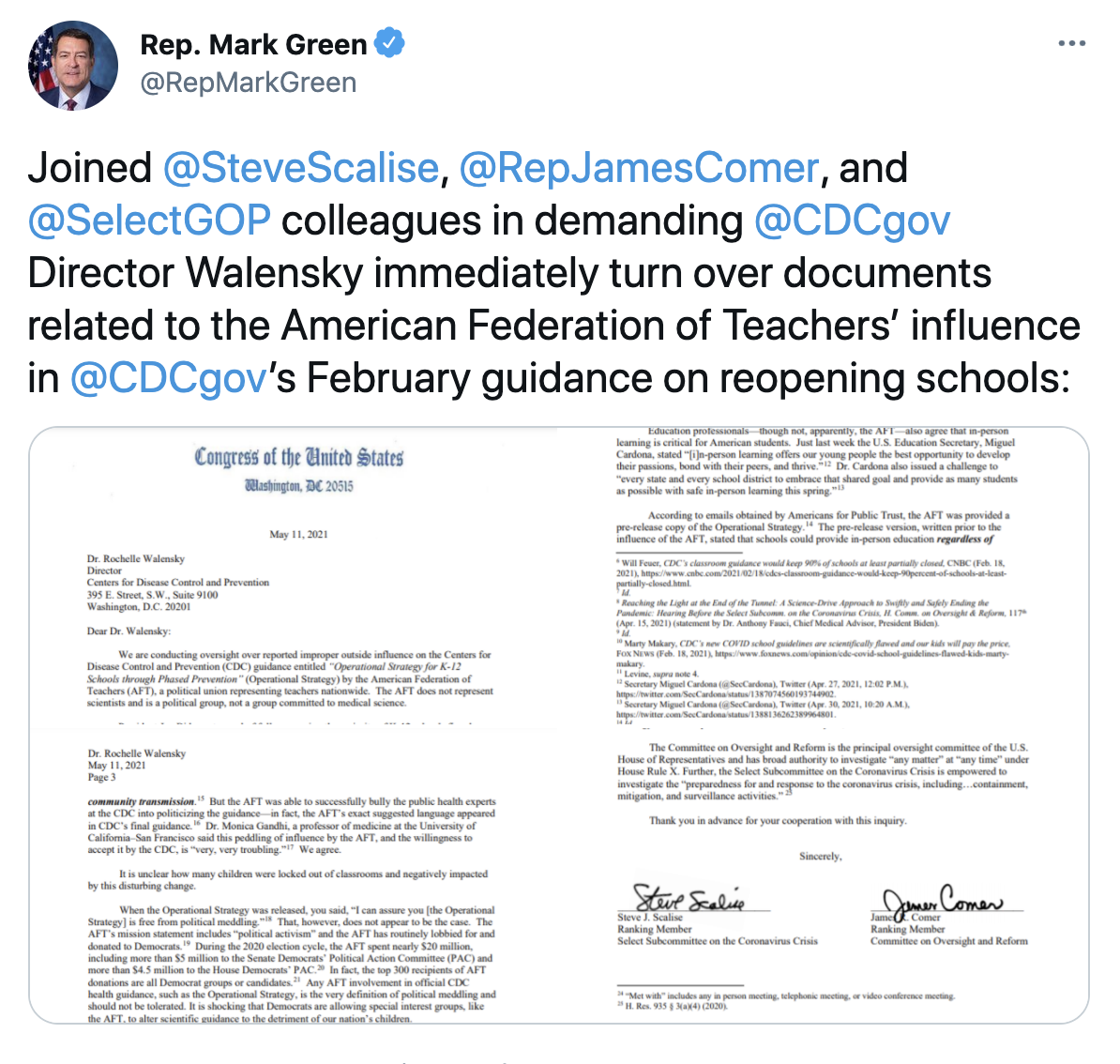 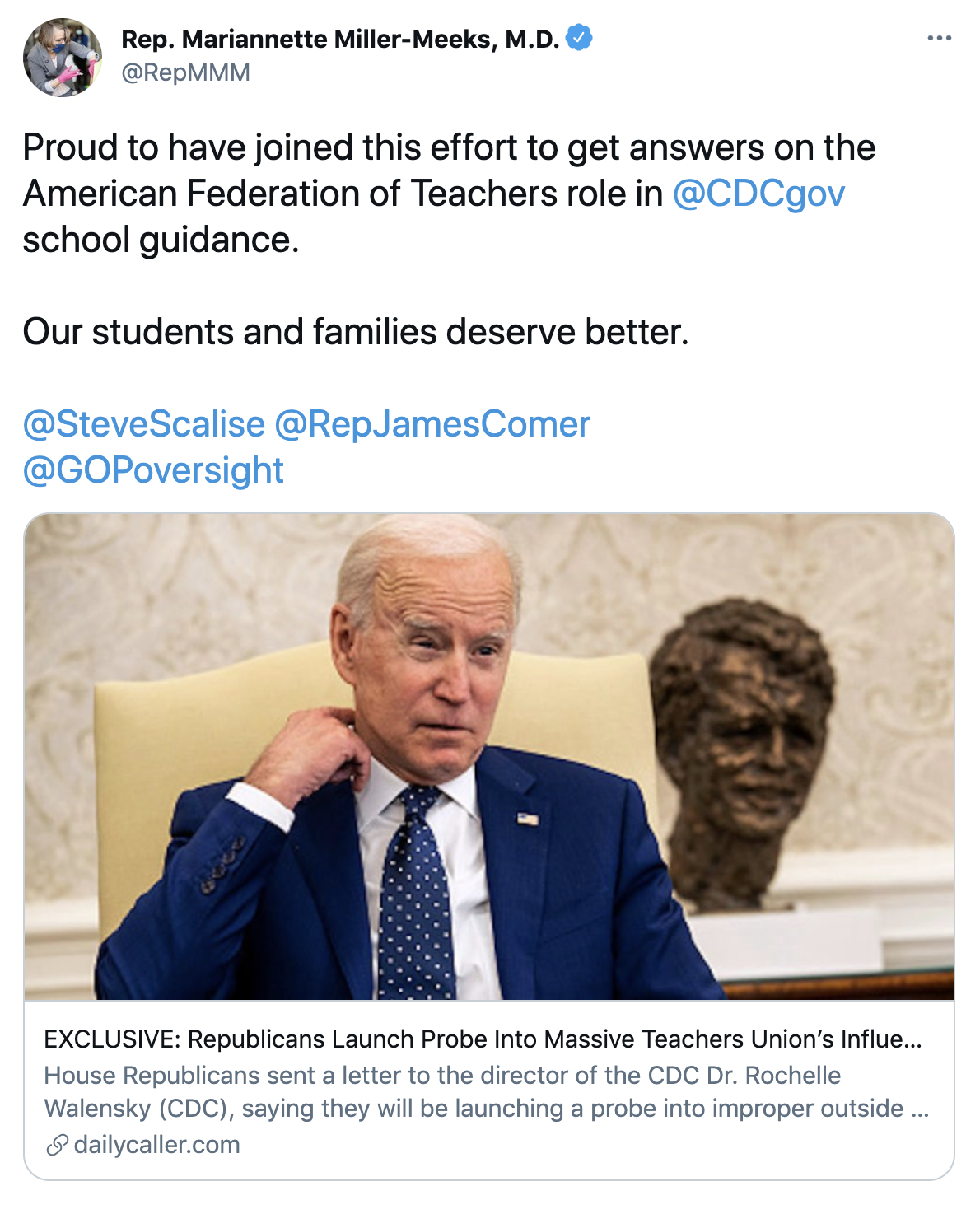 Select Subcommittee Republicans blast the teachers union boss for just now calling for schools to open in the fall. 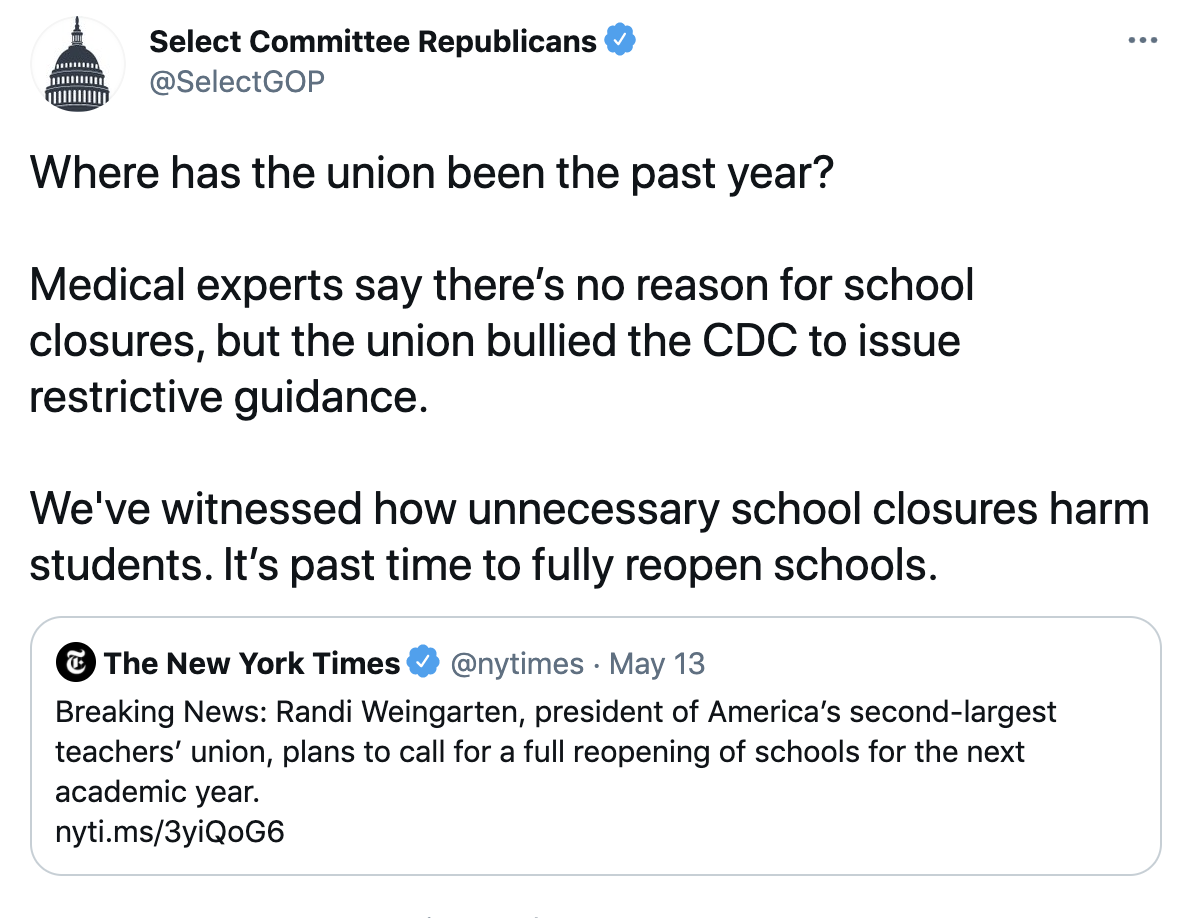 Energy and Commerce Republicans continue to investigate the origins of the COVID-19 pandemic. 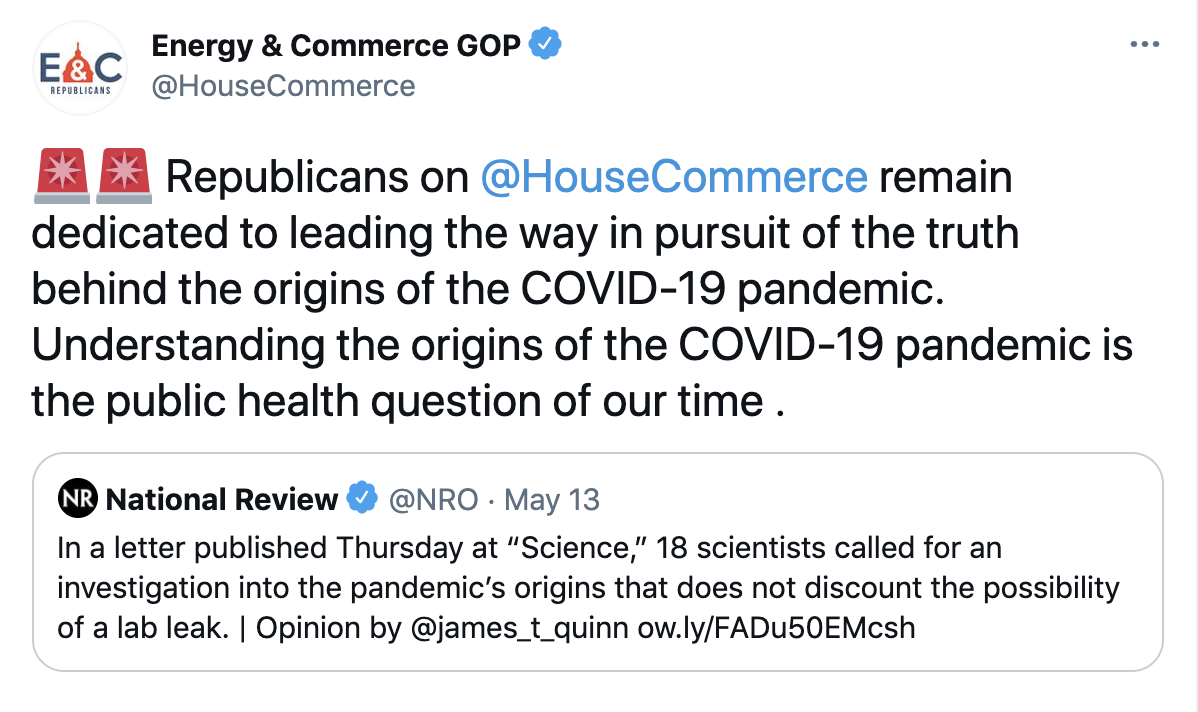